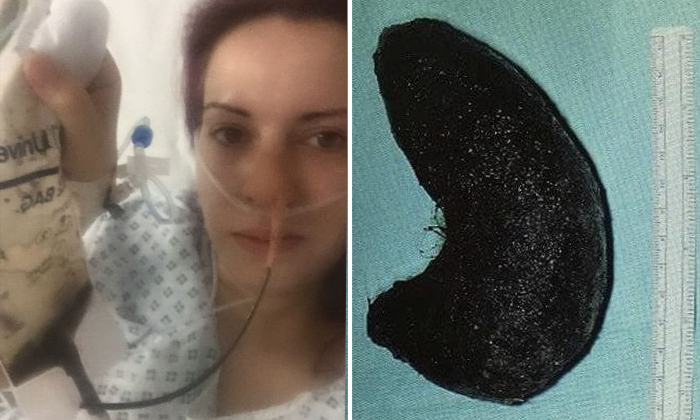 A woman in England who has a condition that compels her to eat her hair in her sleep, has had a 6kg hairball removed from her stomach.

Sophie Cox suffers from a condition known as trichotillomania, an anxiety-related condition that involves patients pulling out their own hair compulsively, Diply reports.

She also has trichophagia, a condition where patients actually eat the hair that they have pulled out.

Otherwise known as "Rapunzel Syndrome," this condition can lead to a heavy build up of hair in the patient's digestive tract, ultimately leading to hairballs.

This act comforted Sophie, who thought it was totally harmless.

Little did she know a giant hairball was growing inside of her for the past seven years.

Things changed when Sophie was pregnant with her daughter.

She started to lose weight, a concerning symptom while pregnant.

After giving birth to her daughter, the pain became too excruciating to bear any longer.

“By October 2015, I couldn’t eat without vomiting and my stomach would swell up.

Only after an endoscopy (scope) was performed did doctors make the startling discovery: All of her symptoms were being caused by a giant hairball.

“The specialist hadn’t seen anything like it in 30 years. It was too big to break down in my stomach, leaving me malnourished and dehydrated," she added.

Doctors scheduled to have the mass removed from her stomach, but unfortunately, Sophie would have to wait five full months with it still inside of her.

Much to everyone's surprise, the hairball was about a foot long!