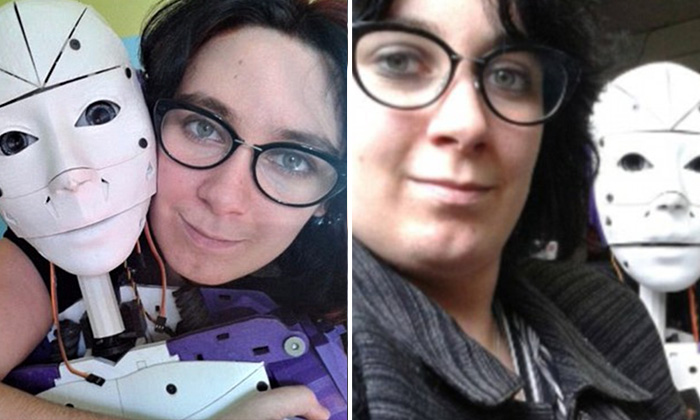 A woman in France has revealed to the Internet world that she is in love with a robot she 3D-printed herself, so much so that she now plans on marrying it.

On her Twitter page, where she goes by ‘Lilly InMoovator,’ she says:

"I'm a proud robosexual, we don't hurt anybody, we are just happy."

According to Asiantown, Lilly is reportedly engaged to the robot and says they will marry when human-robot marriage is legalised in France.

Lilly said she realised she was sexually attracted to robots at the age of 19 because she dislikes physical contact with people.

Humans will marry robots in the next 35 years, according sex robot expert, Dr David Levy.

Not only this, but "sex with robots will become more enjoyable than with other humans, because of the advancement of artificial intelligence", he said.

"The first marriage will be before, not after 2050," best-selling author and robot expert Dr David Levy said during the Love and Sex with Robots conference at Goldsmiths University, London.

She insisted the idea is not ‘ridiculous’ or ‘bad’ but simply an alternative lifestyle.

‘I’m really and only attracted by the robots,’ she said.

However, she declined to say whether she and her robot have a sexual relationship.

"My only two relationships have confirmed my love orientation, because I dislike really physical contact with human flesh."

Her family and friends have accepted her unusual relationship, she said, although not everyone in her life understands.

Lilly, who is training to become a roboticist, believes her relationship will improve further as technology evolves.

Lilly’s relationship could become the norm if an expert of human-robot relationships is to be believed.

At a conference on the matter in London earlier this week, Dr David Levy said humans would marry robots around or before 2050.

Dr Levy, the author of Love and Sex with Robots, also said it will be common in the future to find sex robots modelled on celebrities.

Related Stories
Gamer bride refuses to take part in her wedding -- because she wants to play League Of Legends
Eh bro, please put on your shoes and socks -- this is a cinema, not your house
'Saman' like no other: Cleaner in China surrounds illegally parked car with more than 40 rubbish bins
bizarre
weird
relationship
Love life
technology