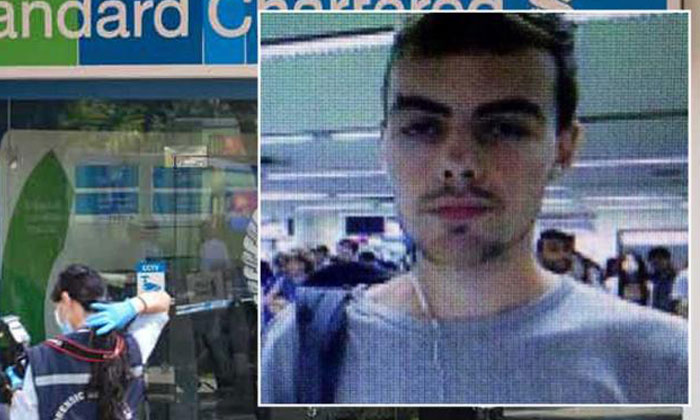 Bank robbery suspect David James Roach, 27, is being investigated by the police in Thailand for failing to report to Thai customs that he was carrying more than US$20,000 (S$28,300) when he entered the country last July (2016).

Travellers going in and out of Thailand are required to declare to customs if they are carrying more than US$20,000 or its equivalent.

The development comes seven months after the Canadian national was accused of robbing the Holland Village branch of Standard Chartered Bank of $30,000 on July 7 last year.

Roach allegedly handed the teller a note with his demands, then fled to Bangkok with the money on the same day.

Three days later, he was arrested at a backpacker hostel and has been in remand in Bangkok since.

He was found with 700,000 baht (S$28,300) in cash, as well as a notebook detailing his escape plan, which included stopovers in Chiang Mai and Dubai.

Shin Min Daily News reported on Wednesday (Feb 9) that Roach, who has hired a lawyer, has been transferred from Bangkok's immigration detention centre and is currently held in prison.

His family has also flown to Bangkok from Canada.

Last July, the Singapore authorities wrote to the Thai government, asking for assistance to repatriate Roach back to Singapore.

A month later, the Attorney-General's Office in Bangkok reportedly rejected Singapore's request. Singapore has no extradition treaty with Thailand.

"We denied it because we are not in the position to consider it," said Mr Amnat Chotchai, director-general of international affairs at the Attorney- General's Office. He did not elaborate on the reasons.

The Thai authorities cancelled Roach's right of stay in the country after Singapore issued a warrant for his arrest. But as an immigration offender, Roach would be deported back to Canada if he cannot be extradited.

However, Mr Amnat told Shin Min that they have yet to receive such a request from the Canadian authorities.

Shin Min reported that investigations into Roach's customs offence started in November and took about 70 days. The case has since been handed over to Thai prosecutors.

When contacted by The Straits Times, a spokesman for the Attorney-General's Chambers here said: "The Singapore authorities remain in touch with the Thai government on the repatriation of suspect David James Roach to Singapore and the return of evidence seized from the suspect."