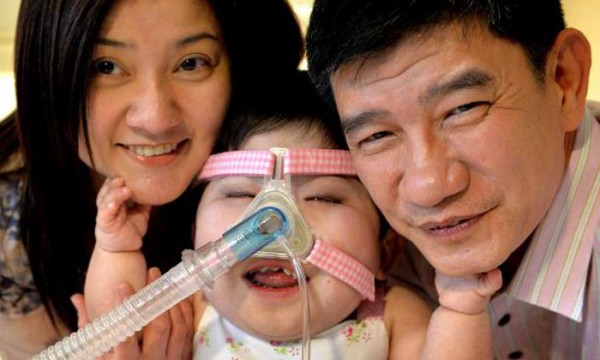 She asked her parents to check her into the hospital earlier this month after feeling unwell because she was hoping to be well enough to celebrate her 18th birthday on Aug 5.

Her condition, which she had battled since she was four months old, had robbed her of the ability to walk or breathe on her own, and had severely stunted her growth.

The teenager trapped in a baby's body had been looking forward to celebrating her birthday in just over two weeks, by checking into a hotel with her family and friends.

On Sunday, surrounded by her loved ones, she celebrated her Chinese birthday with cake and song, but refused to have any photos taken.

After her daughter died last night, Madam Chew Siew Cheng, 47, told The New Paper: "Pei Shan wanted to save the photo and videos for her birthday on Aug 5. She was so excited for it."

Pei Shan's father, cabby Teo Qi Kuang, 57, said: "It had always been the three of us, we did everything as a family. We would take Pei Shan out in her stroller but now it'll be empty.

"It's just the two of us now, we don't know what to do without her."

TNP first reported on Pei Shan and her parents in 2013. Following the report, many readers showed their support by donating and sending get-well wishes to the family.

To care for Pei Shan, Madam Chew gave up her job as a bank clerk when the girl was nine months old.

A few years ago, doctors told the couple that Pei Shan would not live beyond her teens. The tightly-knit family struggled through Pei Shan's multiple operations and hospital stays.

Her condition did not stop her from painting and playing the piano. A watercolour piece she did made it to the front cover of Club Rainbow's commemorative hardcover book Colour Of Life, Celebrating 20 Years Of Club Rainbow in 2012.

In 2014, she performed at a concert organised by the Beautiful Mind Charity at the Singapore School of The Arts.

After being admitted to hospital on July 4, Pei Shan's condition improved and her parents had hoped that she would be able to go home.

"She was well on Sunday and we were very hopeful. But things started going downhill yesterday morning," said Mr Teo.

Pei Shan started feeling breathless and gasped for air at around 4am yesterday. Doctors gave her a higher dose of morphine but by 6pm, her oxygen levels were dangerously low.

"Although she struggled at first, the morphine calmed her and she died peacefully. We were by her side, holding her tight," said Madam Chew.

"She couldn't speak in her last moments. But in her last days, she was still cheerful and upbeat, and would always reassure us that she loved us."

Despite doctors repeatedly telling them to be prepared for the worst, Madam Chew said they had always hoped for the best and that her daughter's death came "too early".

Pei Shan had requested that her wake be themed after her favourite rabbit cartoon character, My Melody.

Mr Teo said: "She wanted her wake to be a celebration filled with music. She wanted people to be happy."

A family friend and founder of charity Portrait From The Heart, Mr Lawrence Loh, 50, was at the hospital last night helping the family with Pei Shan's funeral arrangements.

He said: "Whenever it was my birthday, Pei Shan would send me a WhatsApp message to wish me or even ask her parents to record a video of her singing a birthday song for me.

"Even in her short life, she gave and taught us so much more than what we'd done for her."

Pei Shan's wake will be held at Block 527, Pasir Ris Street 51, from today till Saturday.