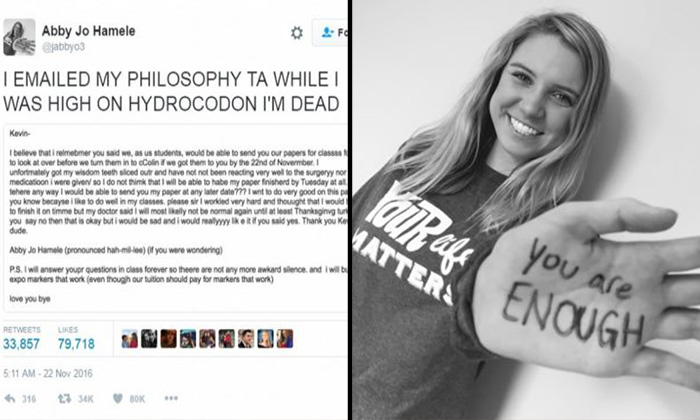 Abby Jo Hamele's email to her Philosophy teacher's assistant while high on painkillers is truly a sight to behold.

The email contains gems such as referring to herself and her fellow classmates as "we, as us students", calling him "Kevin, my dude" and finally, ending off with "love you bye".

According to Mashable, the tweet she sent out with the email attached now has over 33 thousand retweets.

She also tweeted out the teacher's assistant's response.

"This email was, uh, a bit unorthodox," the reply reads.

The teacher's assistant, Kevin Patton, also replied to the twitter thread to confirm that the wild story was, in fact, true.

Kevin told Buzzfeed News that he "laughed hysterically when he read the message".

Maybe we should keep painkiller-high teenagers away from their email accounts next time?

Check out the gallery for screenshots of the full email!

I EMAILED MY PHILOSOPHY TA WHILE I WAS HIGH ON HYDROCODON I'M DEAD pic.twitter.com/ncJ8XX4zoe

Related Stories
Man thinks it's funny to taunt goose -- then ends up running for his life
This Twitter account tells you exactly where it's raining in Singapore right now
Don't worry, your family isn't the only weird one
funny
teen
high
email
hilarious
twitter