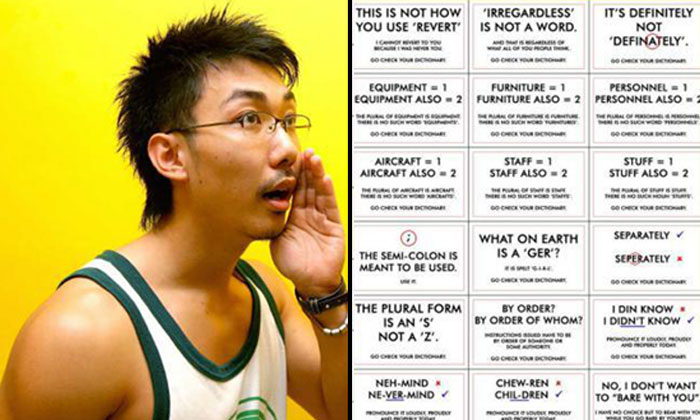 Have you ever heard someone complaining about all the "stuffs" they had to carry? If you have, it's probably best that you forget you did.

The reason is that the word "stuff" has no single form, and adding an 's' to it is not only incorrect, it also does nothing to emphasise that one has many things to carry.

This is just one of the many common mistakes that Singaporeans make when speaking English, and one that Facebook user Aaron Mak has addressed in a series of English usage tips on his Facebook page.

Some other common mistakes he identified include referring to a stamp as a "chop", and pronouncing the word "children" incorrectly as chew-ren.

Mak also encourages the use of British English, and shows the difference between American and British spelling in his slides.

The Facebook album, which was last updated on July 29, already contains 48 slides.

In a description field for the album, Mak asked netizens to print the slides out as reminders to speak and write good English.

"Please feel free to print and use. Especially English teachers, I implore you to. If you have any ideas or requests for new stickers, please feel free to let me know; I would be more than happy to add them," he wrote.

And it seems netizens are finding Mak's tips rather useful. The album has garnered 974 reactions since it was published, with many choosing the 'like' and 'love' buttons to express support for Mak's idea.