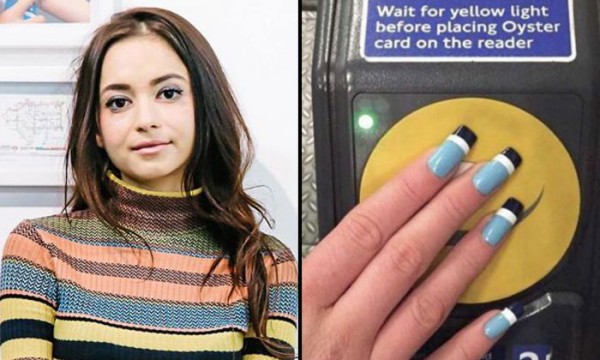 It was only a matter of time before fashion became technologically useful.

An English fashion student has single-handedly found a solution for commuters who forget their Oyster cards (the London version of an EZ-link card): Acrylic fingernails that allows wearers to tap in and out of buses and trains in the London Underground.

British publication Metro reported that Ms Lucie Davis, 22, who will graduate from a jewellery design course at Central St Martins, created an acrylic fingernail that carries a chip that is akin to carrying an Oyster card.

According to Metro, her collection stemmed from a project that asked students to "find wonder in even the most routine activites".

"I took the RFID (Radio-Frequency Identification) chip from an Oyster card and embedded it within a full set of acrylic nails to give commuters the ability to pay for their journeys with a single tap/touch. You can still top them up with money too. Now you'll never have to worry about misplacing your card again," Ms Davis told WAH Nails.

To top it all off, the nail set matches the colours of an Oyster card.

And in case you were wondering, Ms Davis' project has the support of the London transport system too.

"It's early days and it's just a conversation but it's exciting. And people keep telling me what a great idea this is - that they're always losing their cards," Ms Davis told the Evening Standard.

Ms Davis said that the technology used in the nails could be harnessed for credit card payments in the future.

The Evening Standard reported that Ms Davis was picked as the winner out of 1,300 students of the Mullenlowe Nova award for creative thinking and execution.

She is also planning to design a temporary tattoo of the Tube map mainly for tourists, as well as a crystal ring with a "magic" sponge that expands upon contact with water - enabling the easy removal of the jewellery.

Ms Davis certainly has nailed it and is probably going to nail greater things in the future.