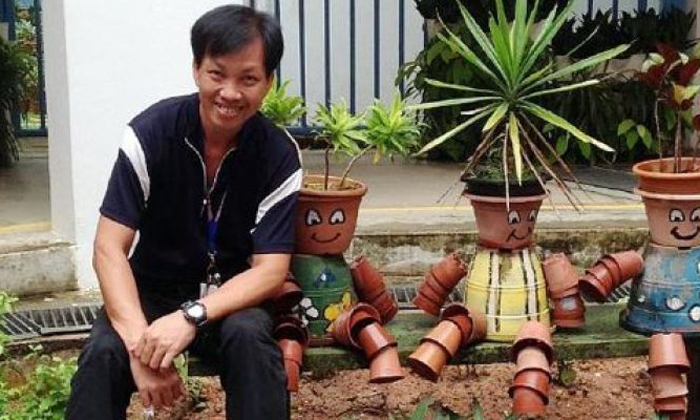 The student had forgotten her dance shoes and had left them in school.

This was just before she was supposed to go on stage for a performance.

Replacing the missing shoes with ordinary shoes would have been fine.

But Mr Andy Ang, 46, who teaches vocational skills at Association for Persons with Special Needs (APSN) Tanglin School, wanted his student to feel good and look her best.

So he took a cab all the way from Tanah Merah, where the performance was being held, to the school in Alexandra Road to retrieve the shoes.

Anecdotes like this peppered the conversations we had with parents and Mr Ang's colleagues.

It is no wonder that on Thursday night, Mr Ang received the Listening Educator for Advancement and Progress (Leap) Awardat the Fairmont Hotel.

Awarded by the Singapore Hokkien Huay Kuan, the Leap Award was launched by the late Mr S R Nathan in 2011 to recognise exceptional teachers who have made a positive impact on the lives of their students.

Mr Ang was one of 11 teachers who received the award and the only recipient who teaches in a special education school.

He has been with the school for 10 years, teaching subjects such as horticulture, housekeeping and Latin dance. He is also the school discipline master.

He told The New Paper:

"I was quite surprised I won the award because I think there are other more deserving teachers."

Mrs Olivia Quek, 45, whose daughter is one of Mr Ang's students, said: "He is a teacher who is able to see potential, even in special needs children."

She described how her daughter, who has a mild intellectual disability, used to struggle with swimming as her co-curricular activity.

Now, thanks to Mr Ang, she is one of the best dancers in the school's Latin dance troupe.

Mrs Quek, a hairstylist who also volunteers at the school, said Mr Ang would make the effort to work with those who were slower at memorising the dance steps.

Mrs Lisa Ow, 58, principal of APSN Tanglin School, said: "Students with special needs have extra difficulty with hand-eye coordination, but Mr Ang does not give up when he is teaching them the dance moves.

When asked about his commitment to his work, Mr Ang said with a laugh: "My wife often complains that I spend more time thinking about my students, plants and dance routines than her."

Mr Ang, who used to work at a voluntary welfare organisation, said he stumbled upon special education teaching when his friend told him about a teaching vacancy at the school.

To equip himself, he took a two-year course to earn a diploma in disability studies.

He said: "I used to look at these children with sympathy, but now I try to find ways to inspire them."

Finding their potential and seeing them succeed is what keeps him at this job more than any award, he added.

He said: "I like my work more than the award, and to me it's just a piece of paper.

"I plan to continue working till it is time for me to retire."

Related Stories
Young S'pore art teacher, 21, pens heartbreaking post after knowing she was going to die from cancer
Texas teacher shocks parents by getting rid of homework for the whole year
Someone needs to give this Republic Poly lecturer a raise
More About:
teacher
youths
inspiring