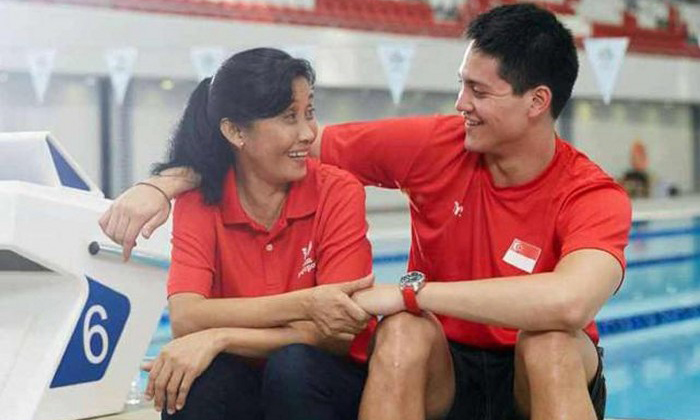 Coaches, teammates and rivals may have seen the evolution of Joseph Schooling the swimmer.

But very few would have witnessed the boy-to-man story of Singapore's Olympic champion from diapers to the Mizuno trunks who went prospecting in Rio de Janeiro and struck gold.

Ms Yolanda Pascual, or "Auntie Yolly", is Schooling's loyal domestic helper who has seen him through his formative years to adulthood, although in her loving eyes he is always her "waterboy".

In a Sunday Times phone interview yesterday, she said: "I've always believed in him. I was watching and shouting for him. I cannot express how happy I am... I was jumping and crying after he won."

Still working for the Schooling household after 19 years, the pair have always been close.

The 21-year-old Olympic gold medallist has even called her a "second mum" in a YouTube video made by Singtel, where he showed his appreciation for her support.

The Filipina started working for Schooling's family in 1997.

She recalled: "He was playful like all boys, but (has) always been loving and caring and a very good boy. He never shouts at me or anybody."

The 56-year-old has a file filled with newspaper clippings of him.

She said: "He'll always say 'I want to be No. 1'. I remember once we were watching (Michael) Phelps on TV, he told me he wanted to be there and be like him, and I knew he could do it. He has a very strong will; if he wants something, he'll get it."

But he never quite had a normal childhood - a sacrifice he made to get into the record books.

"When friends asked (him) to go out, he usually couldn't because he had practice early the next day," said Ms Pascual, who is married with two daughters.

When he experienced lows, she would always be there, behind the scenes, to pick him up.

She said: "He told me when he was very tired, and I'd give him a massage. Even now, when he comes back, he still asks for massages and he's still like the young boy he was before he left."

They are the best of buddies in the Singapore swim team, goofing around for wefies, and you can even say they are brothers from different parents.

And Teo Zhen Ren knows, intimately, the fierce competitive streak that lurks in Joseph Schooling despite his cherubic face.

The pair were rivals who used to race each other in their childhood but are now close buddies.

Teo is an Arsenal fan while Schooling supports Chelsea.

"He's never afraid as well. On the last par for golf, the last shot to win at pool, he always steps up.

"Most athletes might start doubting themselves but it works with Joseph because he's not afraid and wants to prove people wrong.

"Most swimmers say they want to go to the Olympics; for him, it's always been about winning."

David Lim, one of Schooling's former coaches and a former Olympian, said: "It's as though he tasted the feeling of winning when young and he's addicted to that feeling."

Warren Seow, Schooling's former classmate at ACS (I), said: "He was competitive even during PE lessons. He would try to run faster and be at his best when we played games like football. It's hard to believe that same boy would win gold at the Olympics."

Lim believes that because Schooling has this addiction to winning, he is not done yet, saying:

"After he's let it sink in, there are other things he could be eyeing. First, the world record, then (Tokyo) 2020. Now that he's Olympic champ, he'll swim the 100 fly. But another way of motivating himself is to increase his repertoire of events."