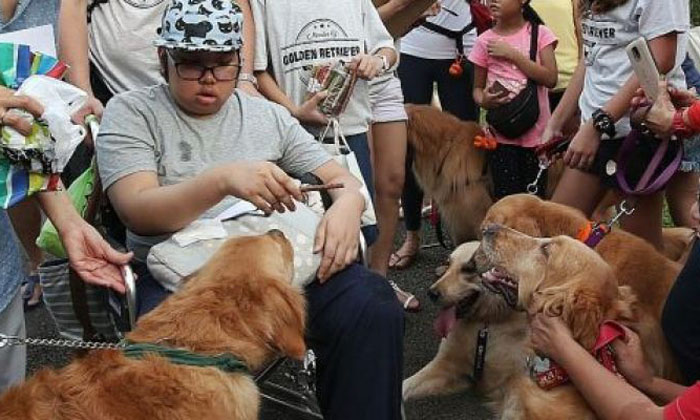 More than 100 golden retrievers and their owners gathered at the Singapore Botanic Gardens yesterday to fulfil the birthday wish of a 12-year-old boy suffering from terminal cancer.

Isaac Lahl, who has cancer of the brain and spine, wanted to pat as many golden retrievers as possible for his birthday.

Dr Leo Seo Wei, 43, an eye surgeon at Mount Elizabeth Medical Centre, sent out a plea through the Golden Retriever Club's Facebook group for help, and it went viral overnight.

Dog owners here were more than keen to make Isaac's birthday a truly unforgettable one.

When Isaac arrived, the canines made a clear path for him while their owners flooded him with birthday gifts and hongbao.

Dr Leo and her two golden retrievers, Jack and Max, had met Isaac in August when he made a wish to the Make-A-Wish Foundation.

Dr Leo, who kept in contact with Isaac's mother, Madam Tan Mei Lee, 54, a teacher from the Movement for the Intellectually Disabled of Singapore, suggested that they plan a birthday party for Isaac's 13th birthday.

"It is very heartwarming," Madam Tan said in tears.

"I did not think it (the birthday party) would be such a big thing. The people who wished him, I do not even know who (they are). I just hope he is happy."

Mrs Chay Sook Cheng Benedette, 32, a human resource administration manager, was one of the many dog owners who helped to fulfil Isaac's wish.

She said: "I have a kid too. It is a heartache to see a kid going through such things.

"His dying wish is to pat dogs. Since we are somewhere around, we might as well come over. This is the least we can do."