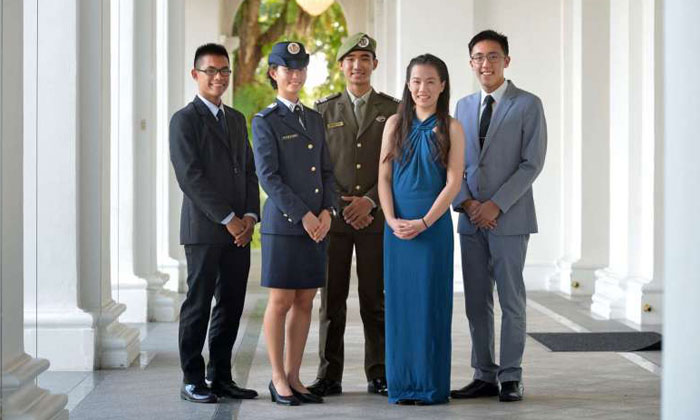 "In the formative years of our nation, we were blessed with leaders, like former President S R Nathan. Mr Nathan dedicated his life to serving Singapore," said Dr Tan in his speech at the scholarship ceremony held at the Istana.

Mr Nathan, who rose through the ranks of public service and served as Singapore's President for 12 years, died on Monday (Aug 22) at age 92. One minute of silence was observed in his memory after the National Anthem was sung at the ceremony.

"He struggled side by side with others of his generation, united in the same purpose-to help our fledging Singapore flourish... As recipients of the President's scholarship, you bear a special responsibility to continue the efforts to take Singapore forward," he added.

He was speaking to an audience comprising of politicians such as Deputy Prime Minister Teo Chee Hean and Acting Minister for Education Ng Chee Meng as well as family members of the scholarship winners and members of the Public Service Commission.

Every year, the President's Scholarship is awarded to exceptional young men and women who pledge to serve Singapore through a career in the public service. Besides achieving academic excellence, the recipients are distinguished by their leadership qualities, sound values and commitment to improving the lives of people in the community.

Dr Tan urged them to embrace their responsibility to become exceptional public service officers and embody the values of public service, like the late President S R Nathan.

"He truly embodied the values of public service, placing country before self even to the point of quite literally risking his life, during the Laju hijacking incident. He was a fearless defender of Singapore's interests abroad, and a passionate nation-builder at home, patiently weaving the fabric of a caring and cohesive society," said Dr Tan.

He spoke of Mr Nathan's varied contributions to the nation, from starting the President's Challenge to encouraging more Singaporeans to help the less fortunate, to investing in Singapore's future through education and promoting racial and religious harmony.

"Mr Nathan will be missed," he added.