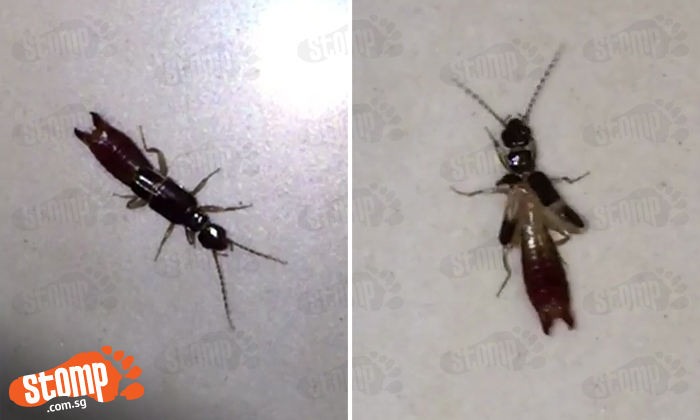 Stomper Lau Lup came across an unusual insect with very interesting features in his home on Apr 18.

He was startled when the creature, which had a head like an ant and a rear resembling a scorpion, revealed its wing and flew away.

"Menacing-looking creature found in my living room in the evening after work on Tuesday 18 April.

"It has a large pincer on its rear end and looked wingless as its wings were hidden inside its body cavity. Hence I was shocked when it flew away!

"Its head looked like that of an ant, while its back looked like a scorpion. Yet unlike ants and scorpions, it was able to fly and hence visit my home which is six storeys high!"

A search online shows that the insect resembles an earwig, a fairly abundant species that is found in many parts around the world.

Despite its distinctive appearance and pincers, they cause little to no harm to humans.

Related Stories
Punggol resident kills swarm of bees hiding in bathroom shower head
This changeable lizard at Ang Mo Kio is a total savage: Look at what it has in its mouth
insect
insects
unusual