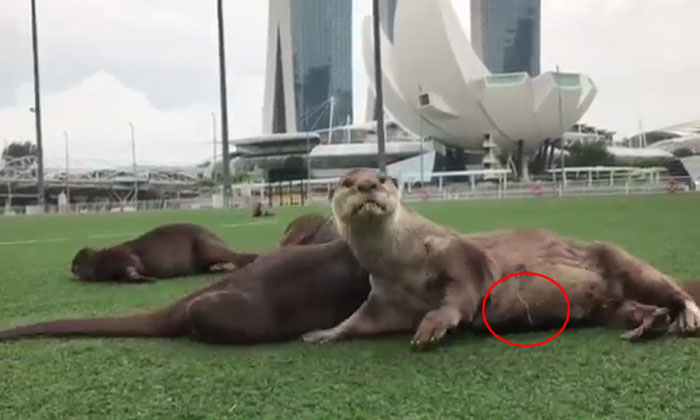 A female otter believed to be the mother of the popular Bishan otters was spotted with a fishing line and hook in its body on Monday (Jan 2) morning, just two days after a sighting of a new litter of otter pups.

Retiree Patrick Ng, 60, who has followed the otters for a year, told The Straits Times on Monday that he spotted the hook and line when reviewing videos he had taken of the otters at about 9am on Monday at the floating platform at Marina Bay.

"I was just shooting them on video and didn't realise it at that time, but when I went home and viewed it, I noticed some strings sticking out," he said.

He added that he noticed "a lot of anglers" when the otters were swimming up to the floating platform, and believes that was how the female otter, believed to be the mother of the litter, got hooked.

Mr Ng goes to watch the otters almost daily, as he cycles in the Marina Bay area for exercise.

He was also the one who saved Toby, a otter pup then six weeks old, from a canal in May last year (2016).

An otter pup in April last year was spotted with a fish hook in its eye.

It recovered from the wound without any external help but the incident roused the anger of animal lovers, who criticised "irresponsible anglers".

Netizens on a Facebook post by otter community OtterWatch on Monday were concerned for the hooked otter.

Another otter watcher, 45-year-old Jeffery Teo, who works in the financial services industry, told The Straits Times that the well-loved Bishan 10 otters were now Bishan 14.

They were given the name as the otters were first spotted in Bishan-Ang Mo Kio park.

A litter of five pups is believed to have been born in mid-November last year but were sighted only on Dec 31.

One of the pups went missing after a trip the pack made to Lower Peirce Reservoir.

Speaking about the latest fish hook incident, Mr Teo said there were anglers photographed at the scene, where "No Fishing" signs have been put up.

"All the signs are erected but nobody seems to be enforcing it especially on the weekends," he said.

Said Mr Teo: "It took decades for our native otters to finally return, if we are not mindful, we may not have a second chance next time."

Ms Anbarasi Boopal, deputy chief executive of the Animal Concerns Research and Education Society (Acres), told The Straits Times that it "is sad to see a wild animal being affected again through irresponsible recreational activities".

She added that Acres has rescued "a number of wild animals such as monitor lizards, turtles and birds with fish hooks stuck to the body or ingested".

"Illegal fishing has to be taken seriously for strict enforcement action, to deter such activities," said Ms Boopal. "At the same time, we also urge the community to be responsible when engaging in such recreational activities, to not leave hooks and lines that can affect the welfare of these animals who live in our waterbodies and to remember that these are habitats that provide home to various animals from invertebrates, reptiles, birds and mammals."

Acres appreciates the ground efforts by the otter watchers, she said.