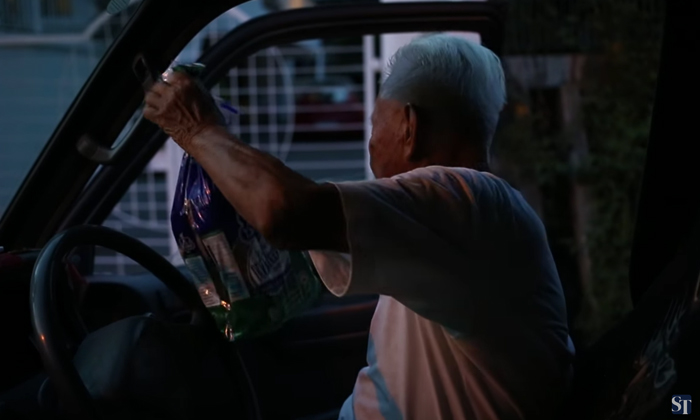 Every day, without fail, they hear the familiar tooting of the van's horn to tell them that their bread has arrived. But this is the last week that residents of Serangoon Gardens and Seletar Hills Estate will receive that familiar greeting from Mr Foo Kee See.

Mr Foo, 78, known fondly as Uncle Bread, will be surrendering the keys to the 17-year-old Toyota HiAce he sells provisions out of, and calling it a day after 55 years.

The mobile Mini Provision Shop - as his customers call it - will make its final round of the two estates on Wednesday before it heads to the scrapyard the next day.

Ms Queturas, 39, who lives in Seletar Hills Estate, has been buying bread from him for 12 years.

Another domestic helper in Tai Hwan Heights, Ms Jenny Cenia, 37, has been a regular for nine years. "Where are we going to buy our bread now?" she lamented. "The nearest FairPrice is so far away."

But it is not just the convenience that they will miss.

When a regular customer moved from Tai Hwan Estate in Serangoon Gardens to a house in Lynwood Grove, near Braddell, he asked Mr Foo to make a detour to the new house so that he could get his regular bread and other provisions. Mr Foo thinks it was the customer's way of making sure he had business. When another long-time customer expressed a wish for a particular kind of bread sold in Serangoon Central, Mr Foo made that a regular detour as well to pick it up.

Often, the regulars do not even pay him right away but will settle their bills at the end of the month.

A customer he has known for more than 20 years also devised a method to let him know whether or not bread is needed on a given day.

The customer's domestic helper ties a yellow plastic bag to the gate to signal when he does. If Mr Foo does not see the bag, he knows he does not have to stop.

You could say that service is in Mr Foo's blood. He started selling bread at the age of 23, riding a bicycle stacked with loaves. He had gone to Dunman High School but stopped in the middle of Secondary 2 due to financial difficulties. His father too had sold bread on foot and bicycle at a kampung in Siglap until he died when Mr Foo was seven.

His mother then took over, going from door to door to sell bread in the same kampung for a few months, before working as a helper for a British family in Siglap. She worked in the same household for more than 15 years while she raised her two sons and a daughter.

Eventually, Mr Foo's bicycle evolved into a 1,000cc Austin which cost him $1,000. With a car, he could sell more items. The current van is the fourth iteration, which he bought for $52,000 in 2000 . He renewed its certificate of entitlement (COE) in 2007 when the price was good but Mr Foo figures it is time to stop now. He said business is not as good as before, but that was to be expected.

In the 1970s, he would sell up to 200 loaves of soft, white bread every day. Many of his customers were British officers living in private estates in Seletar and Serangoon Gardens where amenities were rare. So they were eager for the convenience he brought.

In those days, he said, he could earn an average of $100 daily, a big amount then.

In the mid-1970s, his house in Yio Chu Kang, with its zinc roof, had to make way for redevelopment. His neighbour suggested that they buy a house in the same neighbourhood. So he bought a corner terrace unit in Jalan Kayu for $48,000, for which he paid a monthly instalment of more than $300. The loan was paid off in 10 years and he still lives in that house, he said proudly.

His other achievement, he said, was to put his two sons and a daughter through university.

Change has been the one constant.

In March 1983, Gardenia started a bakery in Pandan Loop, producing 2,000 loaves per hour. Soon, the company's bread was sold everywhere, from supermarkets to petrol stations, he recalled.

He too began selling the brand to cater to the evolving tastes of his customers.

Eventually, he expanded his "Roti Chia" or "bread van" to include other provisions. To date, he has more than 40 items in his van, including eggs, potatoes, onions, detergents, potato chips, beverages and even prayer oil.

A top-selling item is the $8 Singtel hi! Card, a prepaid SIM card which is in great demand with domestic helpers.

And just as tastes changed, so did his customers. While they were once expatriate families, they are now mainly maids, construction workers and retirees. He said children seldom buy candy from him now because parents forbid them to eat many sweet things these days.

Ms Eunice Boey, 45, who lives in Brockhampton Drive, remembers buying Twisties, a childhood snack, and other treats, from Mr Foo since she was five years old.

When her family moved from Seletar Hills to Serangoon Gardens, she was pleased to find out that it was still within his ambit. Today, they buy bread, eggs and snacks from him almost daily.

Ms Boey suggested crowdfunding to raise the cash to extend Mr Foo's COE by five years, figuring he would have enough happy customers. He appreciated her gesture but declined kindly.

The work has become a little onerous now. His 72-year-old wife, who used to get out of the van and open its doors for customers, hurt her back and finds it hard to walk now.

Mr Foo said he has to climb up and down from the van at least 200 times a day and is tired.

"My daughter has been asking me to retire, and says she will give me an allowance," he said.

He has plans for his retirement.

"I want to read the Chinese evening paper properly," he said, "and enjoy a slow walk in the park."