Taxi goes up in flames on SLE 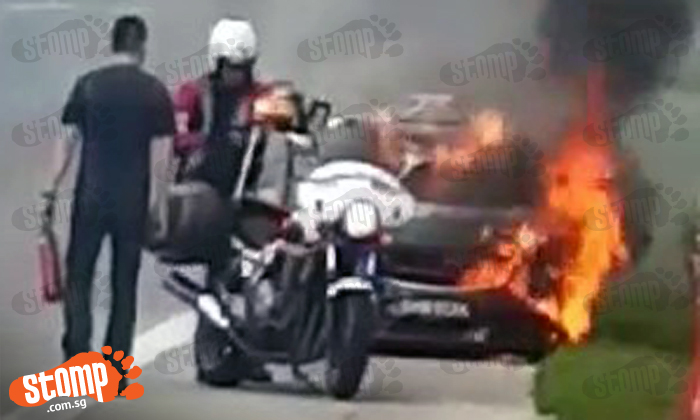 Stompers Tessa and George saw a taxi go up in flames on SLE at 1.30pm today (Feb 8).

Photos and videos the Stompers took show the taxi, stopped by the side of the road, engulfed in flames.

Firefighters were also be seen battling the blaze, and even a passer-by stopped to help as well.

In response to Stomp's queries, a Singapore Civil Defence Force (SCDF) spokesperson said the fire occurred on SLE, towards Tuas, before Woodlands Avenue 12.

SCDF received a call alerting them to the incident at 1.40pm, and two fire engines, one red rhino and two fire bikes were dispatched to the location.

"There were no reported injuries, and the cuase of the fire is being investigated", said the spokesperson.

Related Stories
Taxi bursts into flames at Toh Tuck Road
2 sent to hospital and car engulfed by flames after accident with lorry on SLE
What happened? Car goes up in flames on MCE
car on fire
fire
car
scdf
firefighters