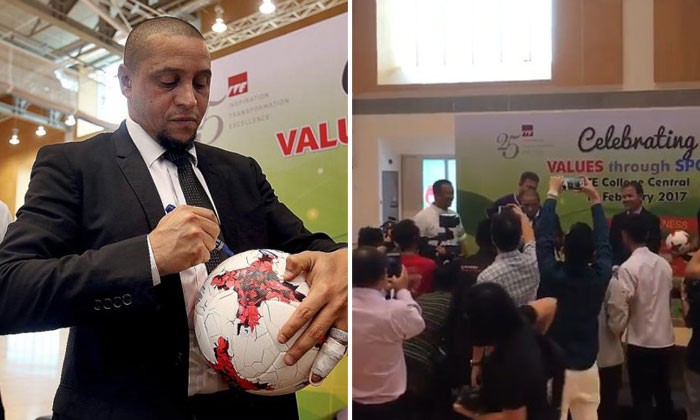 It has been almost five years since he called time on a glittering career.

But, former Brazil and Real Madrid star Roberto Carlos showed that he hasn't lost any of his star appeal, when he made an appearance with former Singapore striker Fandi Ahmad at the Institute of Technical Education (ITE) College Central in Ang Mo Kio yesterday.

A 500-strong crowd of ITE students and staff went wild as the duo booted autographed footballs into the audience.

They then shared with the audience about the values and lessons they picked up during their careers, and how the sport shaped their lives.

Later in the day, the ex-Brazil defender conducted a football clinic for students at Stamford American International School.

At 1.68m, he was about as tall as the students who were less than half his age.

But it soon became clear that he still packs a venomous shot.

Amid cheers and camera flashes from the sidelines, he demonstrated his famed long-range free-kick prowess as he whipped a powerful shot from the halfway line of the school pitch into an open goal.

He also found time to give advice to aspiring footballers.

He said: "For any young person who wants to succeed in life or football, he has to work hard, know his responsibilities in school and respect his family.

"The matter of combining studies and sports can be done through hard work."

Carlos also added that he hopes to continue to inspire the younger generation.

During his playing career, he won one World Cup, three Champions League and four Spanish La Liga titles and he is still regarded as one of the best left backs to play the game.

He said: "It means a lot to be a role model to someone; not just to show what I can do on the field, but also off it - how I behave and go around fulfilling my goals."

Carlos was in Singapore on the invitation of the Real Madrid Foundation Technical Academy, launched in 2013 in collaboration with ITE College Central.