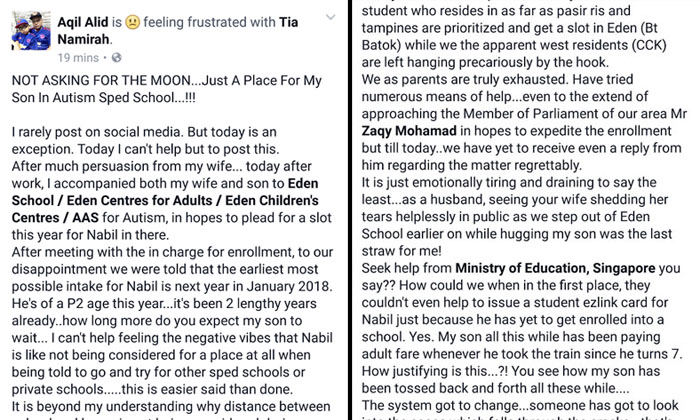 Stomper Hanafi alerted Stomp to a Facebook posting by a father who had lost hope after his autistic son was turned down from enrolling in a special school yet again, despite having already waited for two years.

Hanafi came across the post while scrolling through his Facebook feed, and was saddened by the parents' plight.

The post was made by Facebook user Aqil Alid yesterday (January 3), after his wife persuaded him to bring her and their son to a special school to plead for a slot for the boy.

However, to Aqil and his wife's disappointment, those in charge of enrollment at the school said the earliest possible date their son could join school was in January 2018.

The distraught father said he had already waited two years, and felt like his son was not even being considered for a place at all as he was told to try special education and private schools.

He also lamented that students from areas like Pasir Ris and Tampines had gotten a slot in the school, which is located in Bukit Batok, but his son had been turned down despite living nearby in Choa Chu Kang.

Aqil also wondered why special education schools did not follow the distance between home and school priorities like mainstream schools.

He said in his post that he has tried just about every avenue to get help, even reaching out to his area's Member of Parliament and the Ministry of Education, but to no avail.

Aqil went on to add that his son has not even gotten a student EZ-Link card as he has yet to be enrolled in a school.

This means that the boy has been paying adult fares since he turned seven.

The heartbroken father said the last straw was seeing his wife crying while hugging their son as they stepped out of the school.