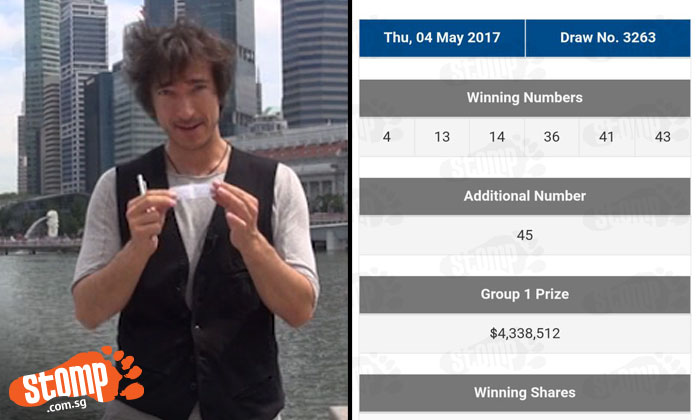 Most people are so jaded that we are sceptics when it comes to this thing called 'magic'.

However, when the Stomp Team had the opportunity to meet world renowned mentalist Nicolai Friedrich, they were left mesmerised.

Mentalists are magicians who perform feats that demonstrate extraordinary mental powers like mind-reading and predicting the future.

The 41-year-old German was crowned "The Best Mentalist of The World" in Beijing in 2009 and has performed all over the globe with 3,000 shows under his belt.

And it is no wonder why.

In a Stomp exclusive, Nicolai took on what most Singaporeans can only dream of doing successfully: Guessing the winning TOTO numbers.

At 2.24pm today (May 4), the Stomp Team went to the Esplanade to meet Nicolai where he had written down the numbers onto a slip of paper.

He then folded it and asked this Stomp journalist to sign on it and write down the date and time.

He then proceeded to lock the paper in a small metal box which he placed in a slightly bigger wooden box that was finally locked inside an even bigger glass box.

The Stomp Team was then tasked with guarding the box until the TOTO results were revealed later that evening.

We swear on our office pets (shrimps, if you are wondering) that Nicolai never got close to the box or tampered with it.

However, the box did attract the attention of curious colleagues who were contemplating losing their jobs in order to get those numbers.

Thankfully, they decided to take the higher road and the box remained safe.

The Stomp Team then headed to Merlion Park to meet Nicolai just after the TOTO results were revealed at 6.30pm.

Making sure that he had no hand in retrieving the paper, I carefully unlocked each box to get the paper.

As I read the first correct winning number, I was still cynical about how he could possibly pull this off.

And then the second number was read and it was right.

As the third, fourth, fifth, and final numbers were read out, I was stunned.

He even got the additional number, 45, right.

It was so mind-blowing, we do not know if we have fully recovered.

However, Nicolai shared that if he had revealed them earlier, those numbers would not have come out.

"Only if I keep them secret... otherwise I would be a millionaire," he said.

If you think that was cool, get ready to be blown away by Nicolai at his show this Saturday (May 6) at the Esplanade.

Get your tickets here.

Check out the amazing reveal and more tricks by Nicolai in the videos below.