Fall in love with Chinese, with Nathan Hartono 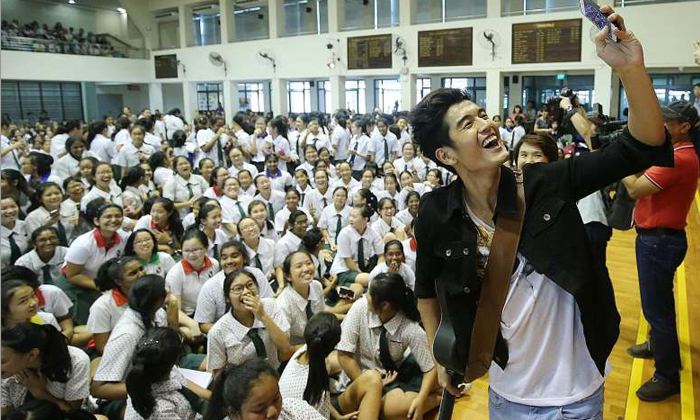 There were no Monday blues for St Margaret's Secondary School students, who were serenaded by local crooner Nathan Hartono in a surprise assembly performance yesterday.

There in his new capacity as the ambassador for the Committee to Promote Chinese Language Learning's (CPCLL's) new campaign, Hartono said his mastery of Chinese was poor before he appeared on TV competition Sing! China last year.

"Terrible," the Nanyang Primary School and Anglo-Chinese School (Barker Road) alumnus said of his level of mastery. "I found Chinese difficult and meaningless and was not interested in learning it."

The campaign, Ai Shang Hua Wen - which loosely translates to Fall in Love with Chinese - will see him embark on a series of school visits to share his experiences.

Secondary 4 student Tanita Giri, 15, said Hartono's story has inspired her. "He is very courageous. To start learning Chinese songs from scratch is not an easy thing."

Related Stories
Nathan Hartono spotted at RWS -- but it's the girl he's with who steals the limelight
Thanks to Nathan Hartono, there will be free Milo peng at Plaza Singapura on Friday
Nathan Hartono
entertainment
celebrity
education
singer
local