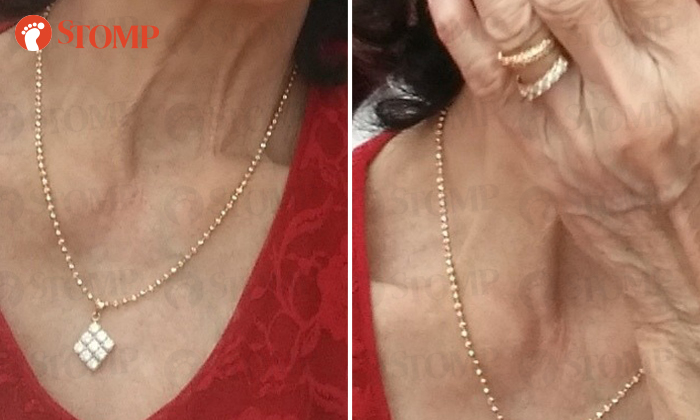 A woman is appealing for the return of her late mother's jewellery, which got accidentally discarded in September.

Stomper Angela said the jewellery includes a gold necklace with a pendant, a diamond ring, as well as several other necklaces, rings and bracelets.

The items had been placed in a small bag, which was left among multiple bags of recyclable items.

The entire load was left at the doorstep of Angela's flat at Block 219 at Toa Payoh Lorong 8 one morning in mid-September.

Angela only realised her mistake weeks after her recycling had been picked up. She lodged a police report in October.

The Stomper is now appealing for the return of the jewellery, which holds sentimental value.

She said: "These items are of utter sentimental value to me as it was purchased by my late father for my mother.

"Before she passed in February this year, she handed it to me, so that I could feel closer to her.

"My late mother told me she had always worn these items regularly as she wanted to feel closer to my late father, and this was something very precious to her (like a piece of my dad).

"I'll be utterly grateful and thankful to anyone who is able to help me find and return these jewellery to me."

Angela said she is offering a handsome token of appreciation to whoever finds the items, and would also appreciate any leads from staff of recycling companies, second-hand jewellery sellers and pawnshops.

She added: "These are items that have seen us through numerous struggles, joyful adventures and painful cancer journey before my late mother's departure.

If you have any info about the jewellery, kindly contact Stomp at stomp@stomp.com.sg or WhatsApp us at 9384 3761.

Related Stories
Geylang resident appeals to man who might have found his necklace to return it
Woman appealing for info after dad's e-bike was allegedly stolen at Compass One
Man looking for kind lady who returned his phone: 'You saved me from much agony'
More About:
lost
appeal