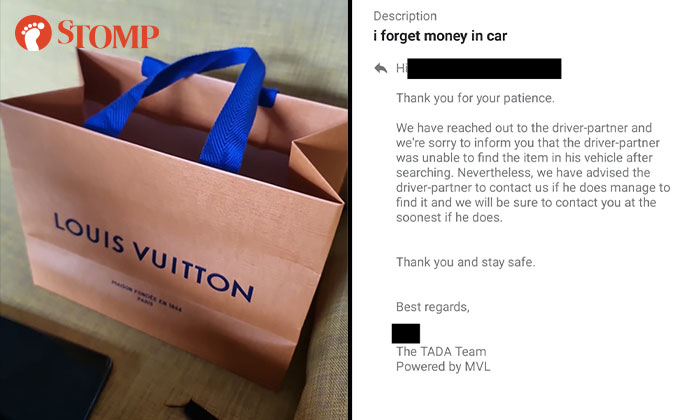 A woman is in distress after losing a Louis Vuitton (LV) paper bag containing $30,000 in cash, two Thai gold amulets, a pair of LV earrings, and her phone's charging cable.

The Stomper had booked a ride with TADA from Sengkang to go to Golden Mile Complex, where she runs a branded goods store, on Tuesday (Nov 8).

She told Stomp she arrived at about 10.20am but at 10.33am, she realised she had forgotten the bag after meeting her customer.

"The LV earrings were for my customer and I had just put them, the money, the amulets, my charging cable, and a free perfume sample together in the same bag.

"I put the bag near my seat and when I alighted, I forgot to bring it with me," she said.

"But when I called the driver he said he did not see my bag in the car even though it was just thirteen minutes ago."

She then proceeded to call TADA at 10.40am and at 10.50am, she called the police before making a police report.

"After I made the police report, I tried calling the driver again hoping that maybe he would think to return my money and bag to me but he didn't and started talking angrily to me.

"I just said ok, let the police take care of it."

When asked why she was carrying so much money with her, the Stomper said she wanted to transfer the money to Thailand to order an amulet.

"I am very worried now because it's a lot of money," she said.

"If yesterday did not happen, I could have bought more branded goods from Gucci, Chanel and Louis Vuitton for my store.

Related Stories
Grab driver looking for pouch she lost containing about $300 cash and her TDVL
Stomper looking for folder containing his sons' birth certs that he dropped in Bishan
Reward offered for lost Oppo phone that was left on bench at Punggol Drive
More About:
lost
money
luxury
bag
Golden Mile