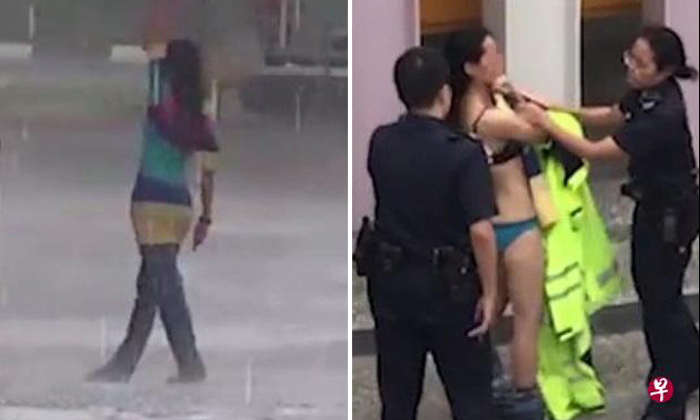 A 39-year-old woman was seen breaking out into a dance at Bedok Town Centre for eight hours on Sep 10, during which she also stripped down to her underwear.

According to Lianhe Wanbao, the woman started her solo antics at around 7am.

A witness said that onlookers did not much pay her much heed at first -- until her dance moves got increasingly strange and attracted everyone's attention.

The woman started swaying both her arms about while her feet remained rooted to the ground.

At 3pm, she was still dancing even though it had rained for a period of time.

Presumably because her clothes were wet, the woman then stripped down to her underwear in front of everyone and started walking around.

At that point, another witness -- finally sensing that something was not right -- called the police.

Police arrived at the scene and arrested the woman, who is understood to be of Vietnamese descent.

She was subsequently sent to the Institute of Mental Health (IMH) for a psychiatric assessment and was accompanied by her family.

Related Stories
Malaysian man loses more than his cool after traffic accident, strips down to underwear in middle of streets
Guy has no issue with making himself right at home at Alexandra Rd bus stop
When you see it: Nude guy spotted on bridge at Yishun Pond
More About:
unusual
unusual sight
strip
underwear
dance
indecent
inappropriate activity
inappropriate attire
police
arrest
Bedok