Whoa! Check out how the SAF special forces storm a simulated terrorist stronghold 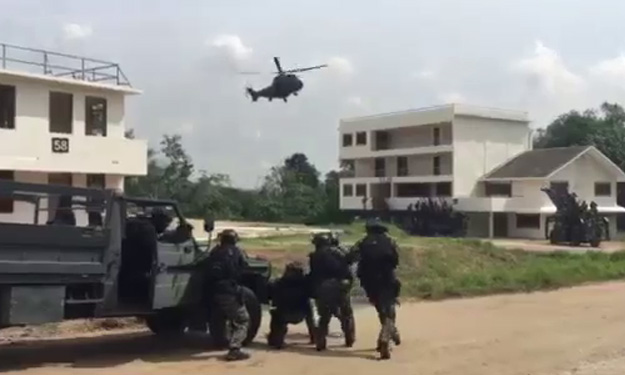 A multinational military exercise for 18 countries culminated in an action-packed land operations on Monday (May 9) where 14 special forces teams, including Singapore Armed Forces Special Operations Task Force, seized control of a simulated terrorist stronghold at a training area near Lim Chu Kang.

The special forces roped onto roofs from the Republic of Singapore Air Force's Super Puma helicopters and stormed a terrorists' hideout in high-rise buildings.

The drill is part of the Asean Defence Ministers' Meeting (ADMM)-Plus Maritime Security and Counter-Terrorism Exercise, which aims to strengthen the capabilities of participating militaries in tackling terrorism and maritime threats.

Defence Minister Ng Eng Hen, who was earlier briefed at the Changi Command and Control Centre at Changi Naval Base, witnessed the land operation.

Speaking to reporters after the operation, Dr Ng said that the exercise is a "very clear and strong signal" of the participating nations' commitment to maritime security and counter-terrorism.

When asked on the takeaways from the joint training exercise, Dr Ng said: "They had to come in together with their interpreters, different systems but against a common threat. Working together really helps build bridges so that perspective of military cooperation, building trust and confidence is their main takeaway."

The exercise is also held amid simmering tensions in the South China Sea, in which China and Southeast Asian countries such as Malaysia, Brunei, Vietnam and the Philippines, have overlapping territorial claims.

Despite that, Dr Ng said that the militaries coming together to conduct the joint exercise is a positive signal.

"Yes, there are disputes in the South China Sea but this is one instance where disputes are put aside and you work together because you know that larger than disputes, if your sea lines of communication are disrupted, or if terrorists embed themselves in Asean, that it will cause a loss of confidence, it will affect economic vitality, it will affect businesses and above all, the safety of citizens of Asean countries," the minister said

Participants include the 10 Asean nations as well as Australia, China, India, Japan, the Republic of Korea, New Zealand, Russia and the United States.