Vets claim horse was in bad shape, but stable says it was not in pain 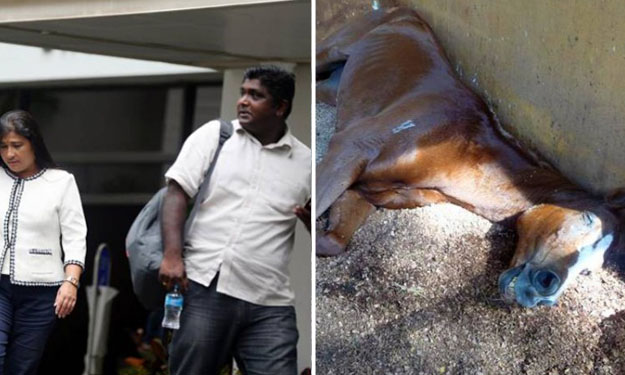 A 17-year-old horse was in such a bad condition that three vets - including a former professor in equine medicine - believed it should have been put down.

Sharpy had dead or rotting tissue on its right lower hind leg and was unable to walk. It had also been given inadequate food, water and bedding, the vets told a district court.

However, Gallop Stable's operations director Thanabalan A. Rengasamy yesterday denied the mare had severe wounds - and insisted it had not been deprived of care, or suffered any pain.

Testifying as the first witness for Gallop on the third day of its trial on a charge of animal cruelty at the State Courts, Mr Thanabalan claimed the dead tissue was scarring caused by an inflammation of Sharpy's lymphatic system.

Mr Thanabalan said he was first told it had swelling in its hind legs by his company's Pasir Ris ranch manager in May 2013. Thinking it to be a relapse of lymphangitis, based on photos he saw, he advised that Sharpy be made to walk.

But by May 15, pus was oozing out of sores on its legs, and Mr Thanabalan asked the manager to call a vet.

That was also the day that an Agri-Food and Veterinary Authority (AVA) vet, on an unrelated visit to the ranch, saw Sharpy lying down with flies in its tearing eyes.

Its condition deteriorated further over the next few weeks, before improving.

The charge the company faces is for failing to provide adequate veterinary attention to the horse on or before May 15, 2013.

By the time a private vet saw Sharpy on May 16, it had slipped and fallen in its stable, causing further wounds. However, Mr Thanabalan claimed it had been adequately protected by rubber matting on the stable ground, with wood shavings sprinkled on top.

Mr Thanabalan denied the claims of the vets who testified for the prosecution that Sharpy was unable to stand on its own due to leg wounds, and said it could get up on its own and walk without any problems. He also denied that it was dehydrated or underfed.

Mr Thanabalan told the court that animal cruelty went against the nature of his company, which has some 85 retired race horses.

They would all have been put down, had his company not taken them in.

He also said his company would not euthanise a horse "unless there's no way the horse would recover and get well".

But when Deputy Public Prosecutor (DPP) Marshall Lim showed him a statement he had made to the AVA, he admitted suggesting to Gallop Stable's owners that three horses be put down because it was "not cost effective" to keep them.

One horse was found unsuitable for riding lessons due to having a hollow hoof and flat toe.

"At the end of the day, we still have to look at running a business," he said.

Mr Thanabalan, however, disagreed with DPP Lim's suggestion that the reason his company spent time, effort and money on Sharpy's recovery was that it was already under scrutiny from the AVA.

The court yesterday also heard that Gallop Stable lost its accreditation with the British Horse Society in 2013 because the latter found that the company's horses and ponies were being kept in unsatisfactory conditions.

DPP Lim submitted to the court a letter from the society to the AVA in support of this, although the contents of the letter were not read out in court.

Mr Thanabalan said he did not know of anyone from the society visiting the company's ranches.

If guilty of cruelty, Gallop Stable faces a maximum fine of $10,000.

The trial will resume at a later date.