Is such a sexually-suggestive game allowed? Guy pushes crotch against girl's face during school orientation game 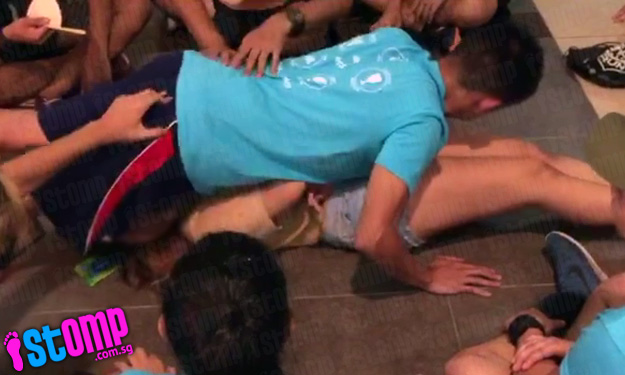 A Stomper submitted this story via WhatsApp. Click here to join our WhatsApp group.

A tertiary school's orientation game depicting a guy pushing his crotch against a girl's face has raised some eyebrows for being too sexually-suggestive.

Stomper Anonymous sent in this video to Stomp, which she got from a friend.

In the clip, the students seem to be playing a game, where the guy does a pumping exercise on top of the girl -- with his crotch against her face.

The other students even told her "not to cover" her face, as they purposefully push him down.

It is unclear where and when this took place.

Back in 2011, a university also generated much talk for a similar push-up game, where guys were made to do the exercise on top of girls. However in this earlier incident, the participants were placed face-to-face.

Games like these in tertiary school camps have long been hot debate among peers and parents.

Does this really promote bonding, as they say, or does it go too far?

According to blogs, camp facilitators have made girls lick whipped cream off a guy's chest or neck.

There was also a sexual-themed activity called 'Secret Pals'. “They wake the participants up at 3 a.m. and blindfold them, and make the girl sit on the guy’s lap,” an organiser said.

Other games include passing MnM chocolates to each other using only their mouths.

Stompers have also written in to share about chalets where students were made to take off their shirts.

According to AsiaOne, students from some schools said their orientation camps often included risque games and forfeit, while others are milder.

"They are bolder and some set up situations to break social barriers, especially since those between ages 18 and 21 are beginning to seek partners," she noted.

But sexually-charged activities can backfire if they are too extreme, he said. "At least 70 per cent of students are conservative and these games could make someone more inhibited."