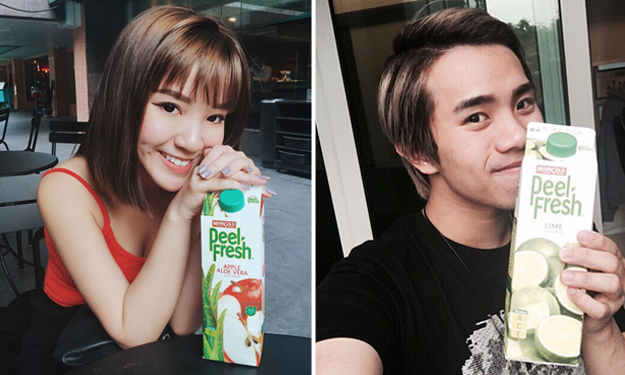 It seems like it with a new, hilarious interpretation of the recent fiasco beverage manufacturer Marigold experienced with its Peel Fresh campaign, where social media influencers such as Naomi Neo and Tan Jian Hao touted their juices.

The campaign has been criticised for using these stars to promote a message as if it's coming from them.

Ms Neo's Instagram post drew more attention as she stated that she is "always carrying around a carton of (her favourite) Marigold Peel Fresh juice (cos Juices > Water any day)".

Comments ranged from snarky to outraged, with Instagram user @isyahiran_ replying, "Idk (I don't know) who in the world would walk around with a carton of juice in their hands but ok", while @riondude said "Say hi to diabetes for me".

In response to ONE FM 91.3's post about Naomi Neo, Facebook user Jazz Lange said: "Why carry a liter of juice when I'm way too cool to sweat in this crazy weather?" while user Sophie Wong said: "Diabetes that's what you'll get if u drink nothing but fruit juice my friend".

RazorTV parodied Neo's post, with a carton of Magnum ice cream, stating it is ice cream, not juice that keeps them "cool and collected".

The Cats of Singapore Facebook page also responded with a parody of Neo's post, using a cat to "endorse" a carton of Marigold Peel Fresh juice even "though it's about 25% of (its) body mass".

The page further made fun of Neo's seeming unrehearsed, organic post by having the cat "end" its own post with: "And pour it out into a puddle on the floor before I can drink - uh...what's my line again?"

See the postings in the gallery below.