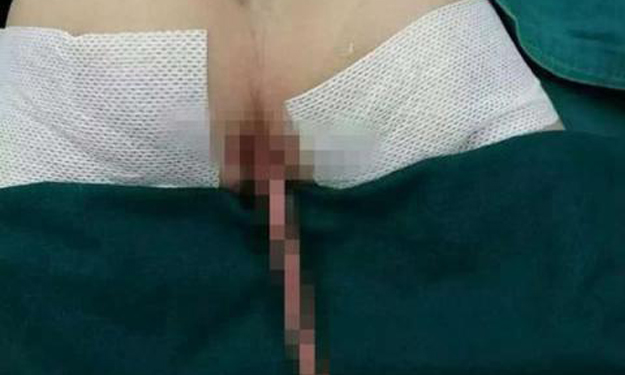 It was supposed to be a routine medical procedure, but the Caesarian section last May was anything but normal for the doctors in the operating theatre.

Doctors in Sichuan, China, were shocked to discover a 15cm-long 'tail in between the baby boy's buttocks during his delivery.

The fleshy growth resembled a rat's tail and was said to be able to curl and straighten by itself.

It earned the infant the nicknames "Little Monkey" and "Little Rat," according to China Daily .

The boy, now 11 months old, recently had his extra appendage removed through surgery at SouthWest Hospital in Chongqing.

There, the infant was found to be suffering from neural tube defects.

His doctor said that the condition typically happens during the first trimester of pregnancy where the foetus's neural tube fails to develop properly.

It may affect the child's brain, spine or spinal cord, and occurs in two to three per cent of all pregnancies.

However, his mother told Chongqing Evening Daily that her prenatal checkups did not show any abnormalities.

Although the boy behaved like other babies, his family noticed weakness in his legs when he kicked.

The infant's surgeon added that leaving the condition untreated will cause his lower limbs to develop abnormally, and eventually lead to paralysis and problems with excretion.

Doctors often advise those who are planning to start a family to consume folic acid prior to pregnancy, which can reduce the chances of neural birth defects by up to 85 per cent.

In 2012, a four-month-old girl had a 6cm-long 'tail' removed at Sun Yat-sen Memorial Hospital in Guangzhou.

Guangzhou Daily reported that her extra appendage was possibly related to her diagnosis of spina bifida, a neural tube defect.