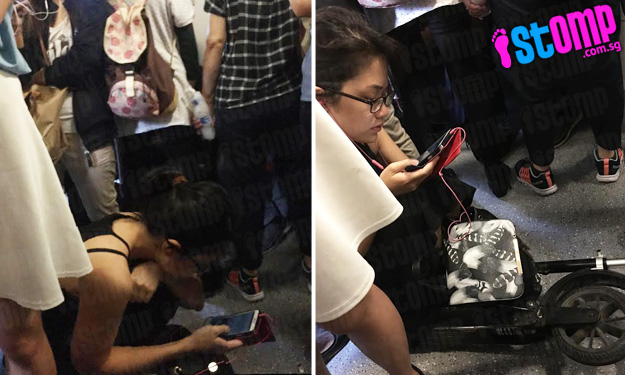 A Stomper saw a young woman sitting on a foldable scooter in an MRT train during the morning rush hour at around 9am.

The girl's actions are questionable given the fact that she could have actually stood up and held her scooter vertically instead of taking so much space by sitting down on it on the train floor.

The Stomper recounted what happened in an email:

"This young lady boarded the train at Jurong East with her foldable scooter at around 9am.

"As most people know, the MRT is very packed during the rush hour as many commuters are on their way to work.

"What surprised me was that she proceeded to take up space on the train with her scooter and sat down on it.

"Many people were staring at her but yet she did not care and just continued using her phone like it was not a big deal.

"People were squeezing, trying to get onto the train.

"One person tripped and almost fell. He did not know she was sitting there and almost fell on her but ended up bumping into other standing commuters instead.

"I hope not all youngsters are as inconsiderate as she is."