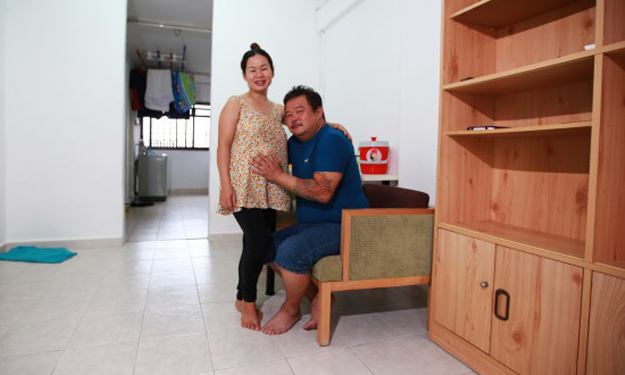 More than 100 people have offered to help a couple whose home used to be a lorry because they could not afford to rent a flat.

Although the Housing Board helped the couple to move into a temporary two-room rental flat in Bedok North last week, readers have written in offering to donate items such as beds and sofas as well as fridges and microwave ovens.

There were also offers of baby items such as cots, clothes, nappies, milk powder and toys.

However, the couple have refused monetary donations.

Part-time real estate agent Molly Thong, 55, who offered her barely-used sofa bed, said: "I really respect the couple. It's touching that they want to build a new life with their own efforts.

"I saw from the picture that they sleep on only mattresses (in the flat), so this is the least I can do."

Mr Ong met his wife in Vietnam while working there for a rice exporter from 2009 to 2013.

They registered their marriage in June last year and she applied for a long-term visit pass in November.

Last month, it was reported that the homeless couple had spent two years in Mr Ong's work lorry and are expecting their first child in August.

Some donors have offered to deliver the items themselves, while others wrote in simply to ask if they could help in any way.

Retired doctor David Tay, 66, is offering a dining table and chairs, a bed and a baby cot. He said: "Hopefully these can lighten their financial burden when the baby comes along."

Mr Ong said he was moved by the offers: "Singaporeans have a warm heart. These are strangers but they still want to help us."

While the couple cannot accept all the donations because their flat is small, Mr Ong said: "I can only accept what we need, like a fridge and a bed. But I appreciate all the kind thoughts."

This article was first published on April 28, 2016.
Get a copy of The Straits Times or go to straitstimes.com for more stories.

Couple who lived on lorry move into rental flat

'I just want a roof for my baby': Couple who live on lorry stresses it's not money aid they need

S'pore man lives on lorry with pregnant wife: "As long as we have each other"