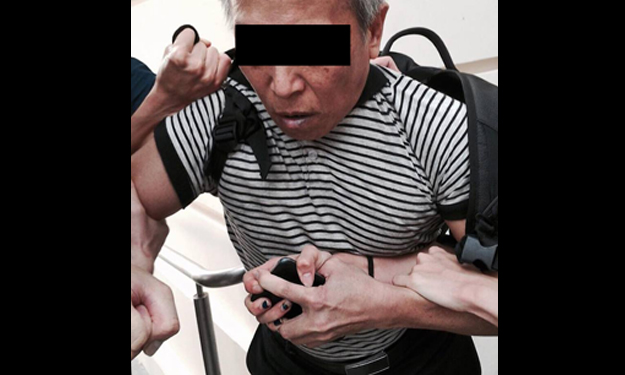 A man allegedly took photos of two women in Boat Quay from behind, then pretended to be making a call on his phone when they noticed him.

The women have taken to their Instagram and Facebook accounts to describe what happened, as well as criticised onlookers who did not step in to help.

According to their postings, the man tried to feign nonchalance when the two girls started to observe him, but a female passer-by confirmed that he had taken pictures of them.

Both women started to give chase and one of them, Ingelica Lee, eventually caught up with him. A few other passers-by also apparently stepped in to help prevent him from fleeing.

The other woman who was with Lee, Sophie Jannah, said that the man started trying to delete photos from his phone as she called the police.

She said, "Not only were there photos of us, there were photos of many girl's butts and up-skirt shots as well!!! All obviously taken secretly.

"As Inge tried to grab his phone before he could get rid of all evidence he scratched and dug his nails into her arms and left pretty nasty scratches on her.

"Finally after an hour, police arrived on scene."

She added that they had ran past at least 20 people, none of whom stopped to help.

Thanking those who did step in to prevent the man's escape, Jannah wrote, "Thank you so much. You helped catch a sexual predator who was trying to prey on my friend and I today.

"Thank you for finally allowing this day of victory where the victims refuse to remain silent and the predator became the prey."

Lee ended her post by saying, "What a day, it was supposed to be my rest day but I ended up sweating buckets."

According to their Instagram accounts, Lee is a dancer and fitness instructor while Jannah is a model, emcee and performer.