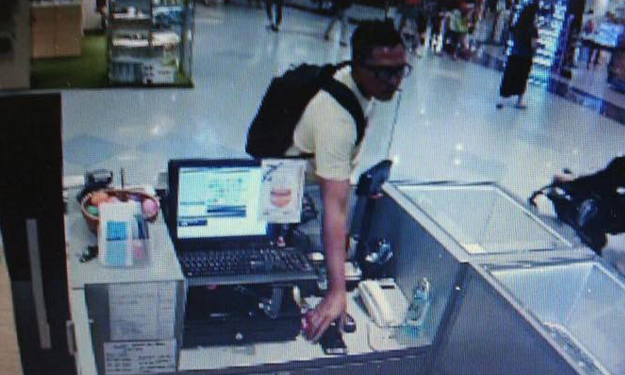 A man was caught on video taking a Samsung Note 5 smartphone from the counter of a shop in VivoCity on Mar 25, at around 2pm.

The incident occurred at writing instruments store Lamy. The phone belongs to the store's 21-year-old sales associate Nurul Hafizah Ismail, who had bought it on Mar 21.

Her friend, Ameerah Aizat had shared screenshots from CCTV footage showing the man getting caught in the act on Facebook.

In the footage, the bespectacled man can be seen carrying a black backpack while looking at the products on display.

Ms Hafizah, who has been working at the shop for nine months, can be seen sitting in front of the cash register machine at the counter.

She told The Straits Times: "The mall was crowded because it was a public holiday, and I did not notice the man at all. I got up to do some filing and then my phone was gone."

Ms Hafizah went back to the counter about three minutes later, but only realised that her phone was missing 15 minutes after that.

She immediately called her manager, who then sent her screengrabs of the CCTV footage. Her colleague, who had been attending to another customer, called the police.

Police confirmed that a report was made and that a case of dishonest misappropriation of property had occurred. Police are still investigating the incident.