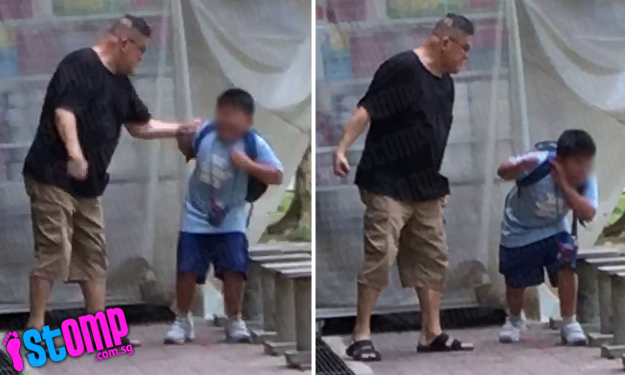 A few members of the Stomp Team witnessed a young boy getting yelled at and punched by a man, presumably his father, at Toa Payoh North, Block 203 this afternoon (Apr 1).

They had been at the block opposite Singapore Press Holdings at around 4.15pm, when they were distracted by some shouting and wailing.

A video filmed by one of the Stomp journalists shows the family of three walking by as the father shouted at his son, seemingly over something school-related.

At one point, the man can be seen throwing a punch at the crying boy's arm, as the latter put his hands up in a defensive stance to block any further blows.

The man also raised both his fists at the boy, who tried to back away.

The commotion drew stares from many onlookers at the block.

The family then took the lift to the 12th storey and the journalist who had filmed the video followed them up after a few minutes.

The boy was seen standing along the corridor while still being yelled at. He entered the flat after awhile, but the shouting from his father continued and vulgarities could be heard.

When the Stomp journalist, who did not dare intervene, left the scene at around 4.35pm, the yelling still had not stopped.