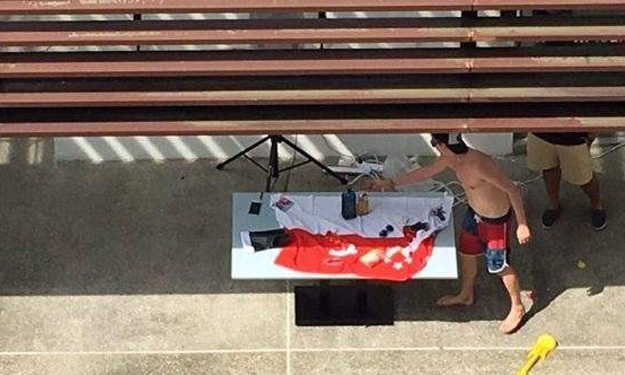 The Israeli Embassy on Wednesday (Dec 30) apologised for an incident in which the Singapore flag was used as a table cloth at a party hosted by one of its junior diplomats.

In a statement on Wednesday night, the embassy said it was "appalled to learn of deplorable behaviour displayed by one of its junior staff members" and expressed its sincere apologies.

The embassy statement did not cite details of the incident.

But on Monday (Dec 28), a netizen put up a post on the citizen news site, All Singapore Stuff, about the Singapore flag being used as a table cloth at a party at the Levelz Condominium at Farrer Road on Sunday.

The author of the post said that a friend had reported the matter to the police.

The Straits Times understands that investigations by the Singapore Police Force revealed that the party was hosted by a junior Israeli diplomat.

The Israeli Ambassador was later summoned by the Ministry of Foreign Affairs.

In its statement, the Israeli Embassy said: "The Director General of Israel's Ministry of Foreign Affairs has instructed that requisite strong disciplinary procedure will be adopted against the individual after his meeting with the Singapore authorities, reflecting the severity with which Israel views this incident, especially in light of the close and friendly relationship between Singapore and Israel."

In a response to media queries on Wednesday night, a spokesmen for the Singapore Ministry of Foreign Affairs noted that the misuse of the Singapore flag is a serious offence.

"We welcome the Israeli Embassy's apology and assurances that it will undertake the necessary disciplinary actions against the individual concerned," the spokesman added.

"All persons, including diplomats and foreigners in Singapore, must respect and abide by our laws and regulations."

This article was first published on Dec 30, 2015.
Get a copy of The Straits Times or go to straitstimes.com for more stories.