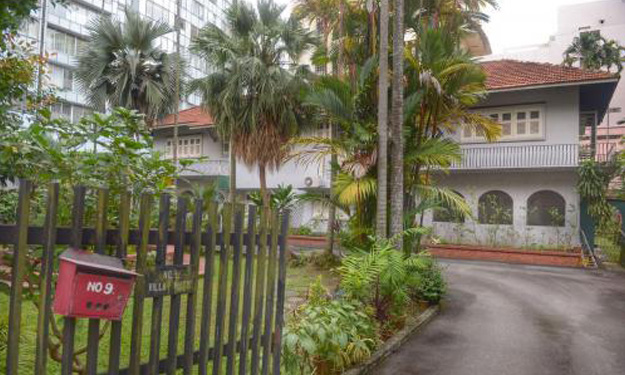 A house owned by the descendants of famous philanthropist Tan Tock Seng has been put up for sale and could fetch as much as $170 million.

The detached house, now vacant, is one of the few under-developed sites in Cuscaden Road, just off Orchard Road. So it has huge potential, especially as a site for a hotel.

It was owned by the late businessman Tan Hoon Siang who headed several rubber companies in Malaysia.

Mr Tan, who was a great-grandson of Tan Tock Seng, was also a chairman and director of Bukit Sembawang Estates until his death in May 1991.

A misthouse at Singapore Botanic Gardens is named after Tan Hoon Siang, who was a keen botanist.

The house is named Villa Marie - presumably in tribute to Mr Tan's second wife, Marie Windsor, who died in 2014. It was purchased in the 1950s.

The 25,741 sq ft freehold site has been put up for sale by trustees of the estate of its late owner, or Tan Hoon Siang's three sons.

His sons and Madam Windsor were listed as joint tenants of the property after Mr Tan's death.

The site is zoned for hotel use although the Urban Redevelopment Authority (URA) said it would consider a proposal for a 20-storey residential project, said marketing agent JLL.

JLL international director Karamjit Singh said a purchaser could redevelop the site into a mid-scale to upscale hotel with about 300 rooms, or a building with up to 185 "shoebox" apartments at an average size of 540 sq ft or 50 units of 2,000 sq ft apartments.

"There hasn't been hotel land supply in and around Orchard Road for many years, especially freehold (sites)," he added.

Desmond Sim, head of research for Singapore and South-east Asia at CBRE, said: "I'm sure the big boys would be the ones that are looking at it. If not, there'll be some joint ventures."