Female passenger goes berserk -- screams at cabby, kicks his taxi... and even kicks him 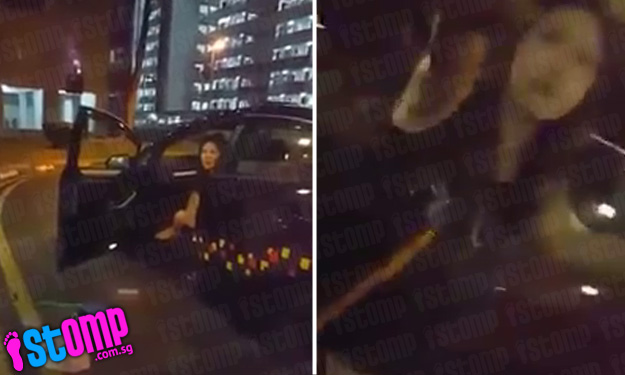 A woman was seen throwing a huge tantrum at a taxi driver yesterday (Apr 5) at MacPherson, kicking his vehicle and screaming expletives at the latter.

Stomper Jeff sent in this video to Stomp, which he said he received from a friend.

The cabby had filmed the incident to show evidence of damage to his vehicle.

"Don't anyhow kick my car, I tell you," the cabby said in Mandarin, to which the woman denies doing so.

The cabby walks a little nearer to her in an attempt to get to his car, but gets kicked by her.

A passer-by asks the cabby what happened, who explains that she was with a friend, but the friend had left already, leaving the crazed woman with the cabby. He had fetched the duo from Jalan Sultan.

He had tried to ask her where she wanted to go, but she did not give her home address.

"She's drunk already, I ask where's her address she didn't tell me how do I bring her home?" he says.

While he explains, the woman continues to yell at the uncle, telling him to "go die".

"The friend run away already, he also scared [of] her," he adds.

She yells, "F**k your mother" and called the cabby "shameless" on multiple occasions.

The woman approaches other residents standing around and says, "You see? I didn't do anything okay."

To which the uncle replies, "What is your address? Where do you stay?" However, she does not answer specifically and says "nearby".

"Why not? You are the vehicle owner," she says and quickens her step towards him.

"You never even give me your address!" the taxi driver reiterates while she follows him.

"If I catch you I will sue you," she retorted.

The cabby tells her to look for her friend, whom he had just dropped off, but she responds by asking, "You want to die? F**k your mother." She then hits his taxi.

He backs away but she continues charging at him in an intimidating manner, telling him, "come la!"

The police arrive at the scene. The bystander breaks into a run and tries to avoid her. She then charges at everyone who was at the scene, yelling expletives.

The charade seems to finally come to an end as officers try to get the story from both sides.