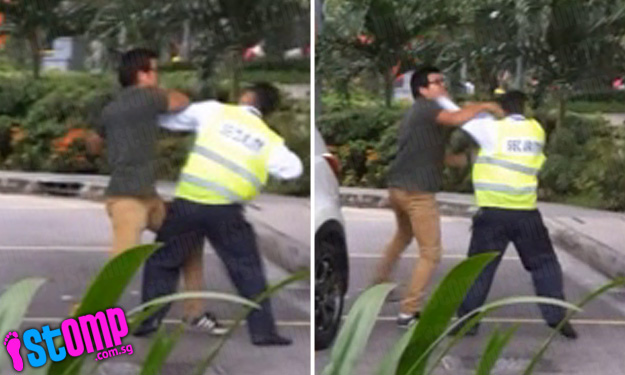 Stomper Victor saw a driver assaulting a security guard at Harbourfront Centre on Apr 5 at around 6.15pm.

According to the Stomper, the driver and the guard first got into an argument after the former stopped his vehicle at the pick-up point of the building.

Victor believes that the driver was not allowed to stop his car there and the argument started after he was told to drive away by the security guard.

In a video the Stomper sent, both the driver and the security guard can be seen pointing and gesturing at each other as well as at the car.

Halfway through the video, the driver can be heard saying "don't touch me" before walking to the driver's seat of his car.

As he was driving the car away, the guard tapped hard on the car twice.

The driver immediately stopped his car, alighted the vehicle and rained two punches on the security guard's face.

The latter moved back a few steps after the attack and raised his hands to protect himself.

Two Caucasian men who happened to be nearby stepped in and stopped the altercation.

The driver then boarded his car and left following the intervention.

Victor has submitted the video he took to the security guard's supervisor. He told Stomp that a police report has been made but is unclear as to how the matter was resolved.