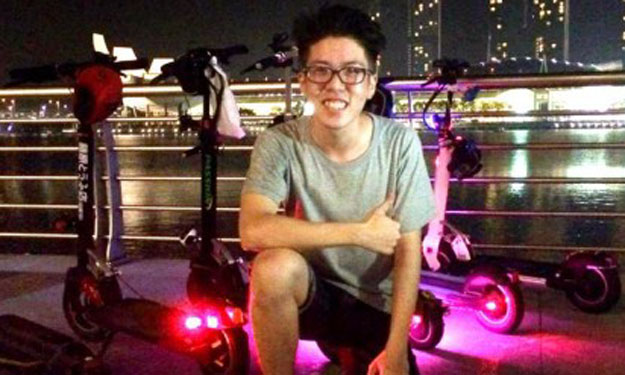 He was a well-known and passionate member of the electric scooter (e-scooter) community.

Mr Sam Koh, 23, worked at PassionGadgets, a shop that sells e-scooters and unicycles, for more than two years and was popular among its customers.

But in a tragic accident, he died on Sunday from serious head injuries after falling from his e-scooter early Saturday morning.

After the fall, he went into a coma and never regained consciousness.

Mr Koh, who was the last rider, fell and landed on his back.

Mr Benson Koh said: "His friend heard a thud and when he looked back, my brother was on the floor, unconscious."

The younger brother added: "He just wore a cap, but didn't wear a helmet. He's an expert. He has been riding for a long time."

Mr Benson Koh did not know the speed his elder brother had been travelling at.

Mr Denis Koh, who represents Personal Mobility Device (PMD) users in the Land Transport Authority's Active Mobility Advisory Panel, has been pushing for the use of these vehicles on footways and cycling paths.

Mr Denis Koh wrote on Facebook that he had met the late Mr Koh while looking for an e-scooter, and was impressed by his passion and knowledge of such devices.

He wrote: "If it weren't for Sam, I would not have got on the bandwagon and do what I do today for the BWSS community.

"In view of the impending approvals, which hopefully Parliament endorses, I dedicate this 'victory' and the beginning of an era for the legitimate use of PMDs in Singapore, under our nation's Active Mobility sustainable future plans, to Mr Sam Koh.

"A bro (who) truly loved and (was) passionate about what he did."

Many in the e-scooter community, which numbers more than 7,000, shared their memories of the late Mr Koh.

"A very passionate and helpful young man. Got to know him when I went to make my 1st e-scooter purchase at PassionGadgets. He taught me how to ride the little monster. Helped me to charge the battery so that I'm able to ride home safely."

He started off with a unicycle and was soon riding and repairing e-scooters as well.

She said: "He was always riding the e-scooter and the Air Wheel, and likes fiddling with them. He even encouraged me to ride the e- scooter to the market, but it can't carry anything heavy anyway."

Madam Oh added that she had warned her son to ride slowly, but she is not sure if he followed her advice.

"He doesn't like me nagging. But he has never got into an accident before. When the hospital called, I thought it was just a scrape. I never expected it to turn out like this."

Mr Sam Koh had many plans for his future, his family said.

He had a long-time girlfriend and they were planning to apply for a flat near his Mountbatten home.

His father, who does odd jobs, suffered a stroke in 2013.

Mr Sam Koh was hoping to live near his family so that he could help to take care of his father.

He also recently gained admission to the Institute of Technical Education and was due to start next month.

He had hoped to get into a polytechnic one day.

Madam Oh said: "I just washed all his uniforms, but he can't wear them any more."