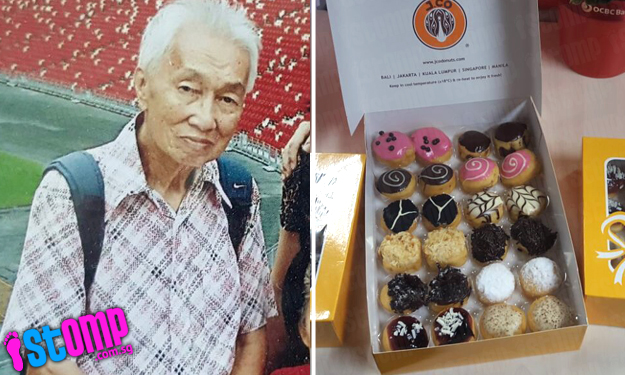 Stomper Simon, who found his father following a missing person's report that was posted Stomp, has expressed his gratitude by sending doughnuts to the Stomp office.

It was earlier reported that Simon last saw his dad, who has mild dementia, at his parent's Mountbatten Road home on Tuesday afternoon (Jul 21).

The Stomper had left the house with his mother, only to find that his father nowhere in sight when he returned a few hours later.

The father and son were reunited yesterday morning (Jul 22), thanks to a kind couple who found the man wandering around Bedok South Community Centre.

The couple noticed that the man looked a little lost, looked it up on the Internet and recognised him from Stomp's missing person's report.

Said Simon about the couple, "They were very kind, they bought him drinks and makan, then informed the police."

Simon also thanked the Stomp Team for the part they played in the incident by sending doughnuts over to the office.