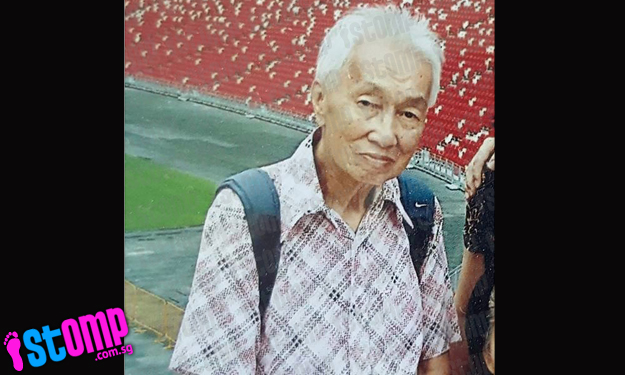 Stomper Simon heaved a sigh of relief when his father was found and brought home early this morning, Jul 22.

Yesterday, he sent out an appeal for help when his dad went missing on Jul 20 at about 12.30pm.

The Stomper had left the house with his mother and returned a few hours later -- but his dad, who has mild dementia, was nowhere in sight.

Simon shared that a couple recognised his father after seeing his photo in a Stomp report.

He said in a phone interview:

"They realised he was a little lost, so they looked it up on the Internet and saw the Stomp report.

"He was wearing the same clothes in the photo.

"They were very kind, they bought him drinks and makan, then informed the police."

"Dear all, until my father has been found and brought back home, I didn't realise how wind up I was.

"Other than sounding a little incoherent and tired, he is alright.

"A kind couple Amanda and fiance saw him wandering around Bedok South CC, fed him and informed the police.

"I can't thank you all enough for the help and kindness bestowed upon us. I am deeply moved and humbled by this incident.

"Our family's heartfelt gratitude to all."