S'porean PR on Langkawi holiday pinned down on bed by trespasser, who says 'I want you' in front of her kids 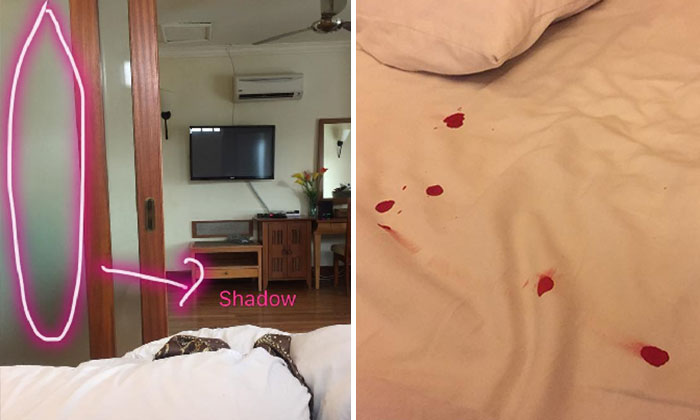 A Singaporean permanent resident (PR) was allegedly pinned down and dragged into a toilet by a half-naked trespasser in front of her two children — an eight-year-old daughter and a 5-year-old son — while vacationing in Langkawi, Malaysia.

The incident happened at a resort in Langkawi on Wednesday (Nov 29) at around 7.20am.

The woman, 34, struggled against her assailant during the harrowing encounter that lasted about five minutes.

She told Lianhe Wanbao that she had brought her children for a vacation at the resort on Tuesday (Nov 28).

On the day of the incident, she had changed and was about to go for a morning run, when she suddenly discovered the silhouette of a man standing at a glass door separating the bedroom and living room of her room.

She immediately asked the man who he was and noted that he was half-naked, and only had a pair of pants on.

The man immediately leapt towards her and pinned her on the bed.

Alarmed, she asked the man if he was robbing her, but he reportedly told her: "I want you."

The woman struggled relentlessly and the two were locked in a tussle for a few minutes, before the man dragged her into the toilet, closed the door and escaped.

The woman said: "I rushed out of the toilet, grabbed my selfie stick and attempted to chase the man, but he was already gone."

She added both her children who were asleep were awakened by the sounds of the scuffle and were petrified by the sight of the man attacking their mother.

According to the woman’s description, her assailant was around 165cm in height, had a dark complexion, and sported a stubble.

She also injured her assailant during the altercation, leaving some blood stains on the bedsheets.

After the incident, she immediately checked out of the resort and took the bedsheets with her as evidence to lodge a report at Kuala Teriang police station at 8.30am.

She subsequently went to a hospital for a medical checkup.

Langkawi district police chief Asst Commissioner Dr Che Ghazali Che Awang told The Star that a suspect, aged 17, has been nabbed in a probe into the incident, adding: "We are in the midst of investigating the matter and are currently in the process of obtaining a remand order."

In response to media queries, the operator of the resort said that he was in Kuala Lumpur at the time of the incident.

He said: "I am not sure of what actually happened and will be going back to get the actual picture."

When asked about the victim’s concern that there were only security cameras at the resort’s lobby, he said that it was a matter of privacy.