Snakes on a Plane just got real 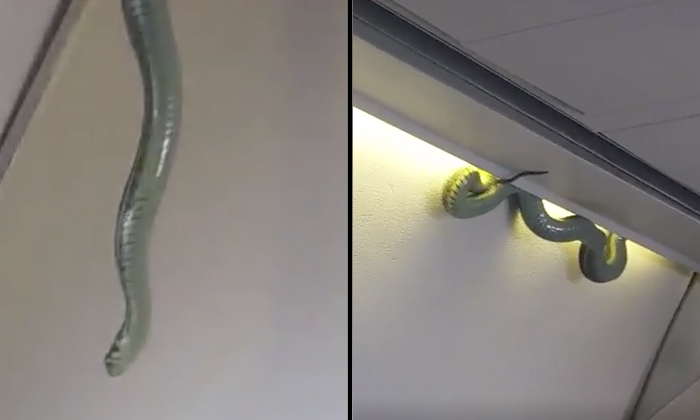 In a case of Hollywood-movie-turned-real-life, passengers flying from Torreon, Mexico to Mexico City on an AeroMexico flight were shocked to find a 5-foot-long venomous snake lurking onboard.

The real life reenactment of the movie ‘Snakes on a Plane’ took place on Sunday (Nov 5).

Twitter user Indalecio Medina was a passenger on said flight and posted a video of the unwelcomed intruder hanging from one of the overhead compartments.

“I had to catch it with a blanket and obviously we gave it some magazines to read for a while.

“The snake arrived alive and kicking, frightened but without having paid its airfare.

“And best of all, priority when it came to landing and animal control experts waiting for the unexpected traveller.”

The flight was given priority landing and animal control experts were called in.

AeroMexico also issued a statement regarding the incident.

According to a spokesperson for the airline:

“AeroMexico reports that today, on flight 231 from Torreón to Mexico City, a snake was detected inside the passenger cabin.

“Due to the presence of the animal and following security protocols, the flight was given priority to land at the AICM.

"Once it had landed, AICM personnel secured the reptile.

“The procedures carried out for this flight are currently being evaluated to determine how the animal entered the cabin and measures have been taken to avoid such incidents in the future.

“For Aeroméxico, the security of its passengers and crew is of the highest priority and it always works to meet the highest quality standards.”

The incident has drawn the interest of many netizens and Twitter have been rife with many “Snakes on a Plane” references.

Fortunately, no humans or snakes were harmed in the process.

Watch the video from Medina below.

Related Stories
Man learns the hard way why you don't take a selfie with a python
Johor family makes nightmare find in home: A 6.7m-long python
Man struggles as he catches a king cobra in Malaysia -- armed only with a stick
snakes
plane
movie
ridiculous
funny