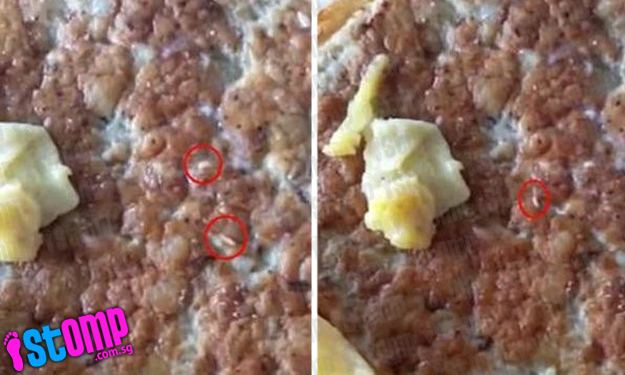 The worms seen on a McDonald's sausage patty in a video taken by a customer were two to three days old, the fast food chain said on Tuesday (Oct 27).

These were the results of laboratory tests after investigations by McDonald's.

Earlier this week, Stomper Kai alerted Stomp to IT freelancer Jasper Lee's find in his Big Breakfast. Mr Lee took a video showing where white worms were supposedly seen crawling on top of the sausage patty.

Lee said that he spotted worms in the Big Breakfast set which was delivered to his home last Tuesday (Oct 20) from a nearby outlet at Block 208, Hougang Street 21.

According to The Straits Times, McDonald's collected part of the patty for testing by an external lab on the same day, and an analysis was carried out.

"Lab tests have determined that the larvae found on the food sample were two to three days old," said Ms Patricia Yong, director of operations at McDonald's.

This means that they were not likely to have been born in the hours after the food was cooked and delivered to the customer.

Mr Lee said the food was delivered to his home about an hour after he placed the order.

Ms Yong said it is also unlikely for the worms to have survived the chilling or cooking processes.

Ingredients at the restaurants are chilled to between -18 and 4 deg C, and cooked at more than 100 deg C.

The fast food chain's investigations thus could not determine how the patty was contaminated with the worms, Ms Yong added.

However, an expert has said that, based on the video taken by Mr Lee, the larvae appeared to be "first instar larvae", that is larvae that have just hatched.

"The larvae look like first instar larvae, but as mentioned before one would need specimens to confirm this," said Professor Rudolf Meier from the Department of Biological Sciences at the National University of Singapore.

The National Environment Agency (NEA) said last Friday (Oct 23) that no hygiene lapses were found at the McDonald's outlet. "There were no expired products found, food items were found properly stored, and there were also no signs of pest infestation on the premises," said an NEA spokesman.

McDonald's has also confirmed that independently contracted pest control agencies did not find any evidence of pest infestation at the outlet or at its suppliers' premises.

When contacted, Mr Lee said: "I appreciate McDonald's efforts to ensure its food quality has not been compromised, even though it's not really a satisfactory answer for me as they still can't address the issue of where the worms came from."