Stand to win a pair of tickets worth $200 to the hottest F1 after party, Baliza's Global Party Series! 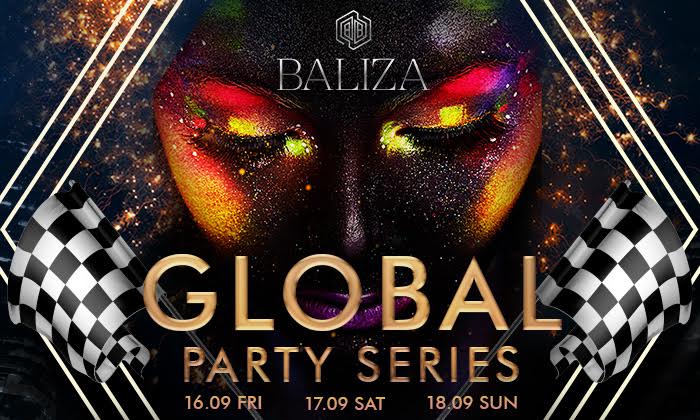 The biggest party weekend of the year is here with the roaring anticipation of Singapore Grand Prix  -- and where better to spend it at than at Global Party Series.

Global Party Series will be held just 50 metres from the F1 racetrack at one of Singapore's youngest Venues, Baliza nightclub, which is only two months old but has hosted hot Hollywood celebs like Selena Gomez and Jason Derulo.

Stomp is teaming up with Creative Insurgence and Vanilla Luxury to give away 20 pairs of tickets worth $2,000 to Baliza's Global Party Series from Sep 16 to 18.

Twenty lucky winners will get a pair of tickets (worth $100 each), which grants you a one-day entry into Baliza for Global Party Series.

Global Party Series is the only party that will run till 7am and a considerable number of celebrities are expected to make an appearance this year!

All you have to do, is tell us: If you were an F1 driver what would you name your car and why?

Submit your entries to us via email at stomp@stomp.com.sg with the subject header "Global Party Series".

Be sure to include your name and contact number in the email as well.

Our judges' decision is final. We will not enter into any correspondence over the awarding of the prizes. Stomp reserves the right to alter the prizes without any prior notice. 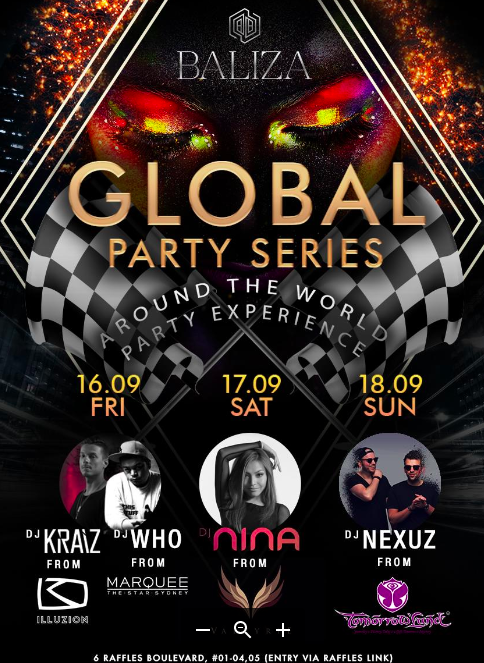 “Global Party Series’’ brings the best club names from all around the world to Baliza. Get on board as we bring you globe hopping around the hottest party destinations, with a taste of Ibiza, Phuket, Manila, and of course our very own little red dot. Each night Baliza will transport you to a different city, giving you a taste of the greatest nightclubs and festivals in the world.

With two rooms featuring unique and separate themes, playing two genres of music, Baliza has something to suit everyone’s taste. Baliza has already made huge waves, shaking up larger more established clubs with well renowned celebrities such as Jae Murphy on the decks, Jason Derulo, and Selena Gomez partying up and living large in the heart of the Lion City.

“Global Party Series” will feature up to two world-renowned DJs from the biggest clubs around the globe, each night over the course of 3 nights, on the week of F1.

Friday 16th, opening night will feature DJ Kraiz from Illuzion Phuket, who has played alongside with big names such as R3hab and Red Foo & LMFAO crew, as well as DJ Who, coming from the land down under, who has shared stages with the likes of Snoop Dogg and many more.

Drop it down low on the Saturday 17th with Asia’s hottest female DJ, DJ Nina from one of the most established clubs in Manilla, Valkyrie. DJ Nina is also the only female DJ nominated for the Urban Music Awards Club DJ of the year. On this night, the Hip Hop room will be playing open format beats, a non-stop unpredictable flow of, ‘What song will she play next?.

Baliza completes the F1 Global Party Series on the third night with featuring NEXUS, Belgium based dj duo, familiar faces from Privilege Ibiza and one of the most popular music festivals in the world, Tomorrowland. They captivate audiences time after time with their own unique style, together with their crowd busting mc skills.

With excellent service standards, world-renowned acts, state-of-the-art technology and an unparalleled invite-only VIP suite experience, “Global Party Series” at Baliza is designed to satiate all your curiosity and cravings for the nightlife experience around the world.

Related Stories
Tell us why you want to party at Sky Grandé Prix and stand to win a pair of 5-night tickets worth $216!
More About:
contest
giveaway
Formula 1