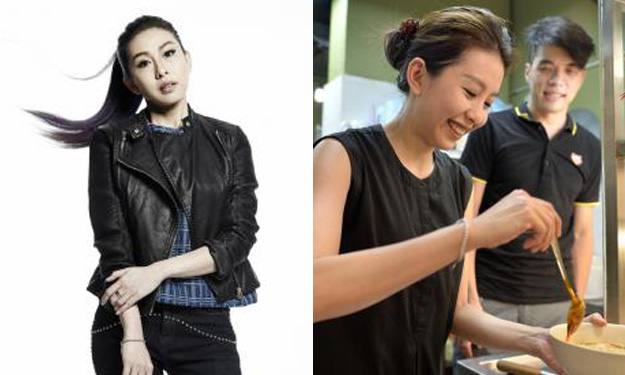 Meet three inspiring millennials among 55 women, aged 20-34, who were featured in the July issue of Her World. Here they are -- away from the heat of their hawker stalls.

Julyn Teoh, 33, who went from being a Singapore Girl to a hawker selling Penang prawn noodles

She has taken the baton from her father, who used to sell Penang prawn noodles in Tanjung Bungah, Penang.

"After 10 years of flying, I wanted to do something that was more 'grounded'," she says.

The trickiest part of cooking Penang prawn noodles is getting the broth right. Miss Teoh and Mr Goh spent three months perfecting the spicy soup base.

"You need to know the exact amount of ingredients to add and the time taken to boil the broth," says Miss Teoh. "If you over-boil it, the broth becomes thick and salty."

One of her pet peeves is that Singaporeans are not familiar with Penang prawn noodles.

She says: "I get a lot of questions about why chilli paste is added to the soup. It does get frustrating at times, but I try my best to explain that is how the dish should be eaten."

She used to visit the fish market at 2am during the monsoon season, when her prawn suppliers had no stock for her.

"These days, I have a better working relationship with my suppliers, so I don't have to go to the market any more," says the lady boss, who peels about 300 prawns daily - which means no more manicures.

She is concerned with the dying hawker trade in Singapore, and her desire to sustain it compelled her to leave her cushy job as a forex broker - with a five-figure monthly salary - to set up Truly Curry Rice (Block 79, Telok Blangah Drive, #01-29, Telok Blangah Food Centre) in August 2013 with her business partner Joel Chia, 30.

But it was not long before she realised that cooking on a commercial scale was very different from a weekend cookout with friends.

"The 15 items on our menu are cooked daily and we added a breakfast menu recently - the prep work is insane," says Ms Tan, who starts her day at 3am and goes to bed at 9pm.

The hands-on boss also washes the cutlery and scrubs the floor at her stall.

Once, she even stuck her arm down the kitchen drain to unclog it - the arms of the guys she sought help from were too big to get the job done.

Nevertheless, this second-generation hawker is happy to continue her dad's legacy, serving old-school Hainanese dishes such as breaded pork chop and chap chye.

Says Ms Tan: "I hope to be able to preserve this part of our culture for years to come."

Joanne Ng, 32, who owns a chain of fishball noodle stalls

1. Selling fishball noodles is not her dream job

But she has always wanted to run her own business.

The bonus that comes with taking over the business from her father, who started Ru Ji Kitchen more than 10 years ago, is that she gets to continue his legacy.

"I love it whenever regular customers thank us for sustaining the stall, so their kids get to eat 'old-school' food," says Ms Ng.

2. The fishballs and fishcakes are handmade...

...by Ms Ng and her husband Daniel Lee, who get cracking at 4am to mould the fish paste by hand, prepare the chilli sauce and fry the pork lard.

Even though Ms Ng's dad guides them, she feels that "it will take years to master his skill".

3. She agrees that being a hawker is unglam

"You work in a hot and stuffy environment, you can't dress up and all your weekends are burned," says Ms Ng.

"But don't be put off by that if you're considering becoming one. You can always hire workers to lighten your workload and shorten your working hours."

This article was published on July 12 in The New Paper.