Security tight at NDP with rise in terror threat 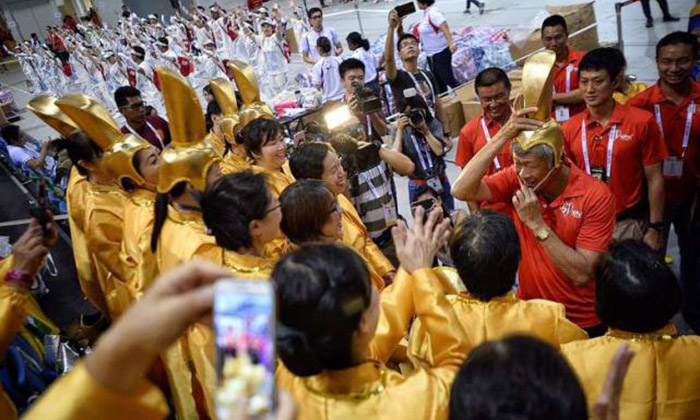 Extra security measures will be put in place for this year's National Day Parade (NDP), given the increased terror threats worldwide.

Defence Minister Ng Eng Hen told reporters this yesterday on the sidelines of an NDP preview, adding that the police have encouraged spectators to show up earlier to go through security screening.

Security was already tightened at the second NDP preview, which was held yesterday, the final rehearsal before the actual event on Aug 9. While there was no security screening at the first preview on July 23, spectators at yesterday's show had to go through bag and body checks at electronic screening posts set up over the past week.

Dr Ng noted that added security checks are something that Singaporeans have to live with, but said that terrorists must not be allowed to disrupt everyday life. "Let's carry on with life. That is, I think, the most robust and resilient way to say that we will not allow terrorists to disrupt our way of life," he said.

Noting that this year's NDP will be returning to Kallang after 10 years, Dr Ng urged Singaporeans to appreciate "the opportunity to celebrate National Day at the National Stadium after quite a long break".

Singaporeans had "got used to the new format" of previous years, such as parachute jumps by the military, outdoor fireworks and the mobile column, he said.

"But you can't do all that in the (new) National Stadium," he said, noting the constraints faced by this year's organising committee.

Still, neither the longer wait due to security checks nor the lack of a mobile column could dampen the spirits of the audience yesterday.

Spirits were particularly high when fireworks went off at the end of performances, catching the crowd by surprise.

Finance executive Jovan Hoo, 32, who was watching the parade live for the first time, said: "It was a very good and engaging performance. Sure, I miss seeing the mobile column but the organisers did a great job. I wish the sing-along (of National Day songs) lasted longer though."

Human resource executive Angela Chng, 28, said the crowds were managed well."The checks were quite fast and the line moved quickly, so I didn't feel it was bad."

Meanwhile, members of the contingent previously fielded by Swiber Holdings, which has opted to go under judicial management after running into financial trouble, will still participate in the NDP, but under the banner of associate company Vallianz Holdings.

Colonel Alvin Yeo, chairman of the Parade and Ceremony Committee, said: "The participants have expressed their desire to continue to play a part in the NDP to put on a dignified parade... We are encouraged by their spirit and commitment, and in standing together as Singaporeans even in the face of adversity."