SAF team to dispose of 2m-long bomb found on barge 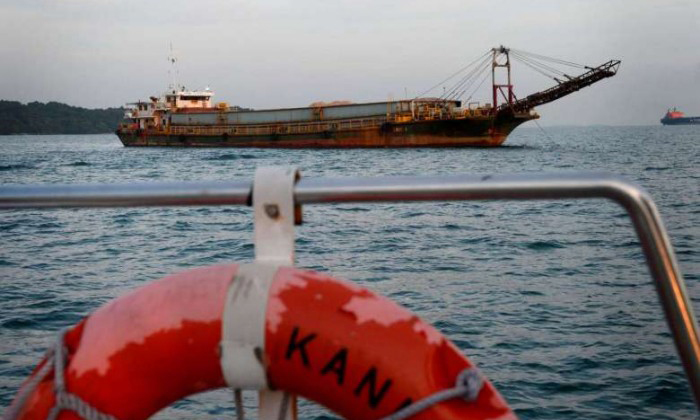 An unexploded aerial bomb found on a barge carrying a consignment of sand from Vietnam is likely to be disposed of by the Singapore Armed Forces (SAF) in the week ahead, sources said yesterday.

The war relic, estimated to be 2m long, was discovered on July 18 on the KNB 1, a Singapore vessel involved in land-reclamation work for a new port terminal in Tuas.

Over the last three weeks, sand around the bomb - which got stuck on the barge's conveyor belt - had to be carefully removed so that experts could access the bomb.

Those involved had earlier suggested hiring a private contractor, as the bomb was found to be safe to be moved on Monday.

However, further checks by The Straits Times found that, given the size of the bomb and its classification as "sensitive ordnance", the task of removing it fell to the SAF's Chemical, Biological, Radiological and Explosives (CBRE) Defence Group.

Sources said the CBRE team is now waiting for ideal tidal conditions at Pulau Senang, which is an offshore island used by the SAF for live-firing exercises and the disposal of unexploded ordnance.

The bomb will be taken to the island and detonated.

The KNB 1 barge is currently anchored off Pulau Sudong, at the Sudong Explosive Anchorage, a designated site for the loading or discharging of dangerous goods.

It was moved from the Tuas reclamation site after SAF experts decided that it was safe to do so.

The sand was loaded onto the KNB 1 from another vessel in the area and was to be unloaded onto the reclamation site when the crew discovered the bomb.

An industry expert, who did not want to be named, said there are generally two ways of detonating an unexploded bomb.

One is a "low order" controlled blast, where the shell of the bomb is cut open and the explosives are burnt.

The other way is a "high order" method, where explosives are attached to the bomb to blow it up.

The expert said he did not believe that the bomb had been launched from an airplane before.

If it had, it would be it armed and highly explosive.

He said: "The bomb was transported all the way from Vietnam to Singapore, and likely never used. It was probably kept in storage and disposed of into the sea, where it was later dredged up, along with the sand."