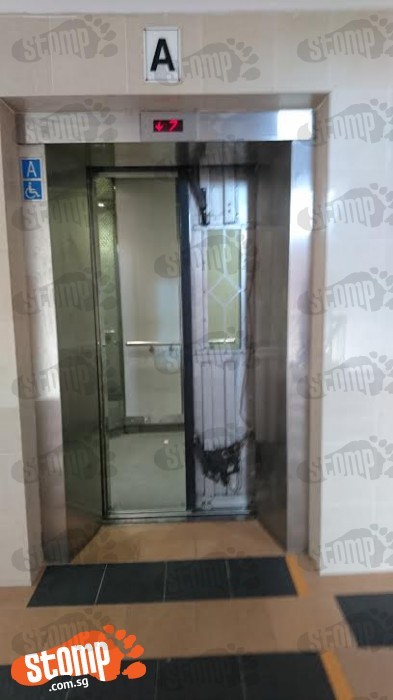 The door of the elevator at Block 162 Jalan Bukit Merah seemed to have broken yesterday (June 24).

Stomper Doorman thanked his lucky stars as he stepped out of it just a mere ten minutes ago before he saw the door.

According to the Stomper, he saw it at about 5pm.

It is unclear what happened to the lift.

There have been a spate of lift malfunctions and related accidents recently.

Early this month, a woman fractured her spine after the 'lift shot up and down' at a Bukit Panjang block.

In May, an elderly man died when his mobility scooter toppled because the lift at the Pasir Ris HDB block where he lived was not level with the lobby floor.

In March, an Indonesian maid was trapped in a malfunctioning lift at Block 317 Ang Mo Kio Street 31 after it shot up to the 20th floor and stalled.

In January, months after an elderly woman had her hand severed by the doors of a lift in Jurong, a Punggol resident posted a video of a faulty lift which continued to move even when one of its inner doors remained open.