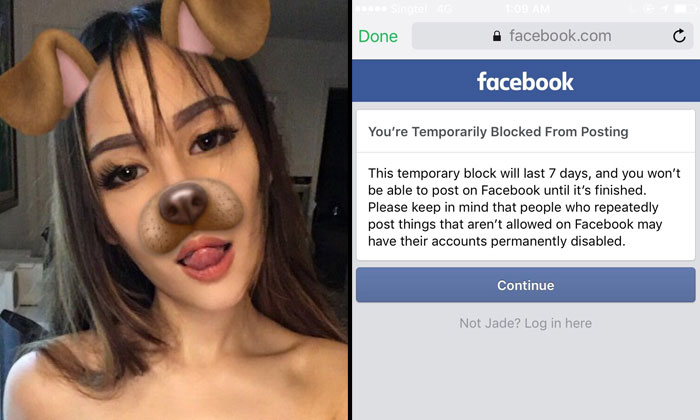 Stomper Jade Rasif, a prominent DJ in the local club scene, was shocked when she received a notification telling her that she has been banned from Facebook for a week.

This is the third time she has been banned and initially, she could not figure out why.

However, she noticed a common trend -- she had used the Snapchat dog filter in all the photos that Facebook had removed.

"I couldn't figure out why I was being reported for being inappropriate at all.

"For my first post, I thought that it might have been because of the cleavage so I cropped the photo higher but I got banned again."

Jade said that the first time she was banned, it was for 24 hours, then three days and most recently, a week.

"If they block me one more time, I will be banned for 30 days and after that my account is at risk of getting permanently disabled to which there is no recourse."

Still puzzled, she googled her problem and found that several other users have had the same experience in this Reddit thread.

She has contacted Facebook but has yet to receive a response from them.

She said: "I love Facebook which is why I want to get back on it so badly."

She told Stomp that the reason she wanted to share her experience was to warn other users about it: