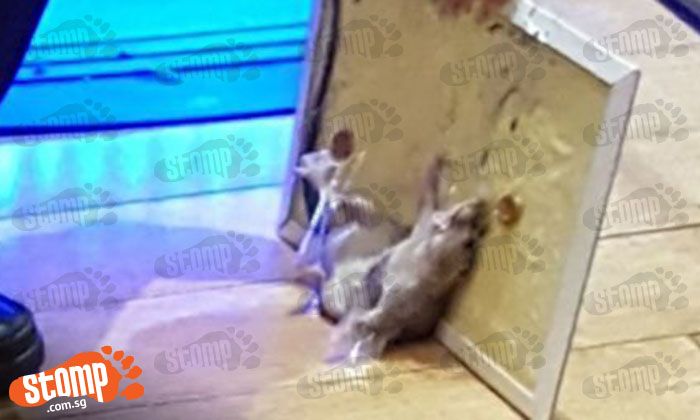 Stomper Kelvin was having a meal at a foodcourt in Marina Bay Financial Centre (MBFC) at 12.40pm when a rat that got stuck in a glue trap fell from the ceiling, right in front of him.

The 37-year-old IT manager lost his appetite at the sight, and took photos and videos of the incident, which he sent ot Stomp.

The video shows the rat struggling in front of a kiosk machine, but no one notices it as the trap looks like a piece of cardboard.

A man eventually steps on the trap to kill the rat, and removes the trap.

"NTUC Foodfare has diligently enforced stringent pest control guidelines and measures for all our food establishments.

"Other than having our appointed pest controllers inspect and carry out proactive preventive measures fortnightly, rat traps are an effective part of our pest control strategy.

"It is unfortunate that one of the ceiling traps was dislodged and we have since reminded our pest control agency to ensure that they secure them firmly."