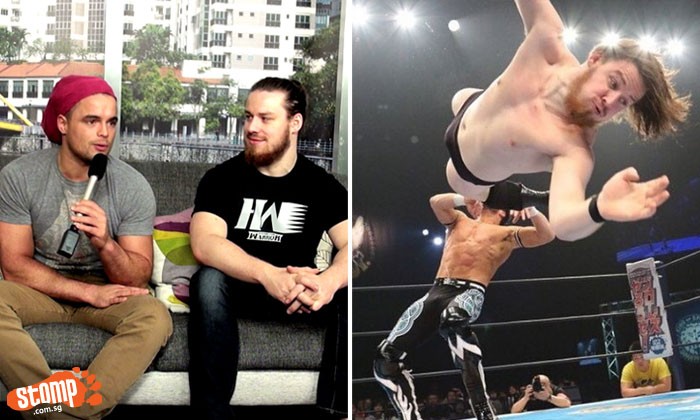 You've probably seen your fair share of wrestling matches on television or on the Internet.

The popularity of the sport in Singapore is hardly surprising. After all, who can resist the tantalising combination of adrenaline-pumping acrobatics and eccentric personalities.

Life for a wrestler outside the ring however is hardly what anyone would expect.

In the run-up to their big matches at Wrestling World 2016 in Singapore, New Japan Pro-Wrestling superstars Juice Robinson and David Finlay shared with the Stomp Team about how life is like for them behind the public eye.

As professional wrestlers, one would expect their toughest opponent outside of matches to be their tough training regimes.

Surprisingly, both athletes revealed that their emotional and psychological challenges outweigh physical ones. Embodying their fighting spirit in the ring however, they have pretty much taken those challenges in their stride.

When one comes face to face with a wrestler, the first thing that they'll notice is probably the humongous build of the person standing in front of them.

Robin and Finlay who stand at towering heights of 191cm and 182cm respectively gave us tips on how someone one can bulk up to get a physique that is as buff as theirs.

As with all visitors to our garden city, no trip to Singapore is complete without trying local food. We also asked the superstars whether they have tried anything exotic during their time here, and they had some pretty interesting answers.

Lastly, the wrestlers who will be competing here for the second time during Wrestling World 2016 shared what they liked about Singapore when they were here in July this year.

At the end of the interview, the superstars sportingly agreed to demonstrate a couple of exercises they were required to do during their training.

We tried our hand at the exercises, and boy were they tough.

Check out our interviews with Juice Robinson and David Finlay below.

New Japan Pro-Wrestling will be making their return to Singapore for a one night show on 15 November 2016.

New Japan Pro-Wrestling was founded in 1972 by Antonio Inoki and has since established itself as Japan's top wrestling promoter.

They are also the second professional wrestling promoter largest in the world in terms of attendance and revenue behind WWE.

The company's roster boats more than 75 wrestlers from over nine different countries.

Its CharaExpo event organised here in July attracted over 19,000 spectators.